Champions League football may just be enough to keep Adama Traore, who has three more years in his Wolves contract, at Molineux. But if they miss on the top-tier European competition, Juventus and Man City are said to be ready with bids to secure a deal for the Spaniard this summer. Barcelona will only try and bring him back to Camp Nou next season. 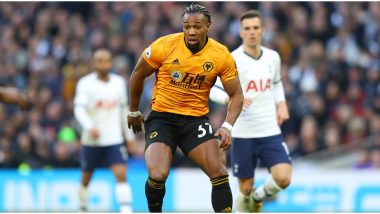 Juventus and Manchester City have moved ahead of Barcelona in their pursuit of Wolves winger Adama Traore. The 24-year-old, who joined Wolverhampton Wanderers from Middlesbrough in 2018, has sparked a transfer war among European elites with several top clubs expressing interest in signing the former La Masia academy player. Traore has scored four times in the Premier League this season and also has nine league assists to his name. The Spanish winger is only behind Kevin de Bruyne and Trent Alexander-Arnold in the assists charts in the Premier League. Manchester City Boss Pep Guardiola Refuses to Comment on Future Targets, Wishes for Lionel Messi to Remain at Barcelona.

According to an ESPN report, both Juventus and Manchester City are now favourites to rope in the talented Spaniard although it also suggested that Traore might stay at Wolves if the club manages to secure Champions League football next season. Nuno Espirito Santo's side are currently placed sixth in the Premier League points table and have 52 points from 33 matches.   Lautaro Martinez Transfer News: Barcelona Unwilling to Pay Striker’s Release Clause but Remain Optimistic About Striking a Deal.

They are three points behind Manchester United, who are placed fifth and can secure Champions League berth if they can finish fifth with five leagues games remaining and if Man City’s European Ban is also upheld. Wolves also can qualify for the UCL by winning the Europa League, in which they played a 1-1 draw away from home in the first leg of the round of 16 encounter.

Champions League football may just be enough to keep Traore, who has three more years in his Wolves contract, at Molineux. But if they miss on the top-tier European competition, Juventus and Man City are said to be ready with bids to secure a deal for the Spaniard this summer. Barcelona, who sold Traore to Aston Villa in 2015, have made it clear that they will make an attempt to bring him back to Camp Nou next season with the club prioritising outgoing this transfer window.

City are already in the market for a winger having sold Leroy Sane to Bayern Munich for €49m last week. Guardiola is reportedly seeking a suitable replacement for the young German prodigy and have identified Burnely’s Dwight McNeil as their primary target. But the club could move for Traore if the latter is available although he is expected to be much more expensive than McNeil.

Juventus, on the other, need to reduce the average age of their forward line with only Paulo Dybala (26) on the younger side. The other three – Cristiano Ronaldo (33), Juan Cuadrado (32) and Douglas Costa (29) – are either on the wrong side of 30 or approaching it.

(The above story first appeared on LatestLY on Jul 08, 2020 12:29 AM IST. For more news and updates on politics, world, sports, entertainment and lifestyle, log on to our website latestly.com).