According to Inter Milan, the window to sign Lautaro Martinez for his current release clause will expire at the end of day on Tuesday (July 7, 2020). However, as per Barcelona, the clause is valid for another week but the Spanish club has no intentions of activating it. Barcelona believe that due to the financial effects of coronavirus, his asking price can be lowered. 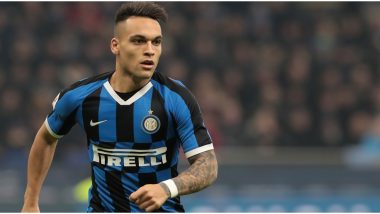 Barcelona are looking at yet another expensive attacker to solve their problems and this time it is Inter Milan striker Lautaro Martinez. The Blaugrana club considers the Argentine to be the ideal replacement of Luis Suarez but the 22-year-old forward comes with a hefty price tag, which the Catalans are not willing to pay. Martinez’s release clause is expected to be €111 million but Barcelona are adamant on lowering it. Lautaro Martinez Joining Lionel Messi at Barcelona Will Be Beneficial for Argentina, Claims National Team Assistant Coach Roberto Ayala.

According to Inter Milan, the window to sign Lautaro Martinez for his current release clause will expire at the end of day on Tuesday (July 7, 2020). However, as per Barcelona, the clause is valid for another week that is until July 15, 2020, but the Spanish club has no intentions of activating it. Lionel Messi Transfer News Update: Barcelona Captain Would Be Tempted to Join Pep Guardiola at Manchester City, Says Rivaldo.

Inter Milan are adamant that they will not sell their stars below their asking price or unless there is a desire on the player's part to leave and according to them Lautaro is happy at the Italian side and has expressed nothing about wanting to join a new club. So this mean’s Barcelona will need to pay the striker’s release clause in full in they want to acquire his services.

However, the Catalan side believes that due to the financial effects of the coronavirus pandemic, the striker’s asking price can be lowered below its current mark. In April, Goal reported that Barcelona are willing to offer the 22-year-old a €10m a year deal and they believe that it could help them in signing the player.

As per reports, Lautaro is also interested in joining the Spanish side as he wants to play alongside Argentina team-mate Lionel Messi. However, with Inter Milan refusing to budge off the 100 million-plus asking price, Barcelona are prepared to wait to open negotiations and even add some players in the deal to sign the 22-year-old.

(The above story first appeared on LatestLY on Jul 07, 2020 05:21 PM IST. For more news and updates on politics, world, sports, entertainment and lifestyle, log on to our website latestly.com).