Recent results implied the game could be another potential banana skin for Atletico, who have seen their lead at the top of the table cut from 10 to three points over the past three weeks, but Diego Simeone's side got through their visit to the east coast with three vital points, Xinhua news agency reported. 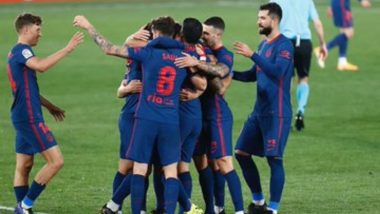 Madrid, March 1: Atletico Madrid opened up a five-point lead over Barcelona at the top of La Liga after a 2-0 win away to Villarreal. Recent results implied the game could be another potential banana skin for Atletico, who have seen their lead at the top of the table cut from 10 to three points over the past three weeks, but Diego Simeone's side got through their visit to the east coast with three vital points, Xinhua news agency reported.

They had a touch of fortune in their opening goal when Stefan Savic's 24th-minute header was saved by Sergio Asenjo only to bounce back over the line off Antonio Pedraza, but an assured second-half display saw Joao Felix double their lead in the 69th minute after a poor clearance from Pau Torres.

The result puts pressure on Real Madrid, who entertains Real Sociedad on Monday night. On Saturday, FC Barcelona produced one of their best displays of the season to win 2-0 away to Sevilla. Ousmane Dembele and Lionel Messi scored as Barca gave their rivals very few options in attack less than three weeks after losing 2-0 on the same ground in the Copa del Rey. Mikel Arteta, Arsenal Manager, on Barcelona’s Radar To Replace Ronald Koeman As Head Coach.

Dembele put Barca ahead after a pass from Messi in the 29th minute and Messi doubled the lead with five minutes remaining. Barca will worry about losing key players after Pedri went off injured and Ronald Araujo lasted just minutes in his return from an ankle injury.

Kike Barja's 77th-minute goal gave Osasuna a 1-0 win in their local derby away to Alaves, who have lost six games from eight since Abelardo Fernandez returned as first-team coach and now slip back into the relegation zone. Getafe will breathe easier after ending a run of five defeats from six games which had put the future of coach Jose Bordalas in doubt.

Mauro Arambarri opened the scoring in the 39th minute with a 35-yard thunderbolt, Juan Mata doubled Getafe's lead shortly after Valencia defender Mouctar Diakhaby was sent off for a professional foul, and on-loan midfielder Carles Alena completed the rout five minutes from time.

Huesca continued their improved form with a 1-1 draw away to Eibar with Sandro Ramiro opening the scoring for Huesca in the 81st minute, before Pape Diop's header two minutes later drew Eibar level. Valladolid climbs out of the bottom three despite conceding an injury-time equalizer that condemned them to a 1-1 draw away to Celta Vigo.

Winger Fabio Orellana put Valladolid ahead after Celta goalkeeper Ruben Blanco parried a shot to leave him with a tap-in, but Jeison Murillo's powerful 93rd-minute header denied the visitors a vital away win, even if it lifts them above Alaves.

The round of matches kicked off with Levante and Athletic Club warming up for Thursday's Copa del Rey semi-final with a 1-1 draw with both goals coming from the penalty spot as Roger Marti opened the scoring for Levante 10 minutes before halftime and Raul Garcia cancelled that goal out after the break.

(The above story first appeared on LatestLY on Mar 01, 2021 10:04 AM IST. For more news and updates on politics, world, sports, entertainment and lifestyle, log on to our website latestly.com).