Teams from Spain have been the dominant force in European competitions in the 21st century courtesy of their firepower up front. From the likes of Cristiano Ronaldo, Lionel Messi, Luis Suarez to Joao Felix and Ansu Fati, the Spanish top division has always been home to some of the greatest attacking talents. So, we take a look at some of best forwards in La Liga this season. 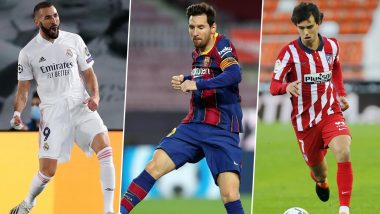 La Liga is one of the best football leagues in the world and has been blessed with several world-class attacking players over the years. From the likes of Cristiano Ronaldo, Lionel Messi, Luis Suarez to Joao Felix and Ansu Fati, the Spanish top division has always been home to some of the greatest attacking talents football has ever seen. So here, we take a look at some of the best forwards in La Liga this season.

Although in recent years, La Liga's superiority in European competitions has begun to stumble, teams from Spain have been the dominant force in Europe in the 21st century courtesy of their firepower upfront. Along with it, four of the top five scorers in Europe’s biggest club competition (Champions League) have plied their trade in Spain’s top footballing division.

The Argentinian has been below his best this season but has still been the driving force for Barcelona in a troubled campaign. The 33-year-old has scored five goals this season but has been unlucky. Messi is also the leading creator for Barcelona with 27 chances but is yet to register an assist. However, the Catalan side looked like an improved team in the past weeks and it looks just a matter of time before Messi’s stats improve.

The Spaniard is one of the main reasons why Real Sociedad currently second in the La Liga table, just behind leaders Atletico on goal difference. The 23-year-old has scored seven goals in La Liga this season while also registering two assists. The La Real youth academy star has been involved in more than 40 per cent of the club’s goal this season which highlights his importance.

The Portuguese has been in stellar form this season which has seen Atletico Madrid set the pace in La Liga this season. Joao Felix has scored five goals this season while assisting a couple in 11 games so far, of which he played seven from the start. More than his contributions in goals, it has been the 21-year-old’s influence on the entire team which is his most notable aspect.

Karim Benzema is the main reason why Real Madrid are not currently struggling in mid-table. The Frenchman has come with some crucial goals for the Los Blancos this season as they sit third in the table. Benzema has been involved in nine goals this season (six goals, three assists) in 11 appearances this season.

What Iago Aspas means to Celta Vigo fans is similar to what Lionel Messi and Diego Maradona mean for Barcelona and Napoli faithful. At 33, the Spaniard is in the form of his life and has single-handedly dragged Vigo into the top half of the table. Aspas has scored seven goals and assisted four in 13 appearances this season, being involved in 11 of Celta’s 17 goals this campaign.

(The above story first appeared on LatestLY on Dec 17, 2020 01:30 PM IST. For more news and updates on politics, world, sports, entertainment and lifestyle, log on to our website latestly.com).