Messi was named Player of the Tournament for his spectacular performances, which included four goals, five assists and a lot of jaw-dropping moments with the Argentine star scoring goals from jaw-dropping free-kicks. 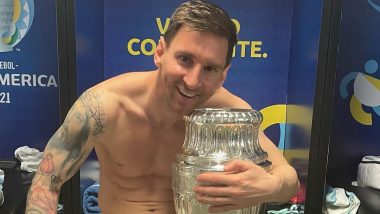 Lionel Messi and breaking records--is a never ending story. And while he seems to do most of it on the pitch, he is now breaking records outside of the football ground as well. Few days ago, Messi achieved his dream of winning an international trophy with Argentina--something that has eluded him throughout his career. Argentina defeated defending champions and arch-rivals Brazil in the Copa America 2021 final to win the title, capping off what had been a wonderful tournament for the team and Messi, in particular. Lionel Messi Joining PSG Was a Dream, Believes Argentine Midfielder Leandro Paredes

Messi, emotional after the loss, took to Instagram to share his picture with the trophy and as it stands, it is the most-liked picture so far on an athlete on the picture-sharing platform. It is also the most-liked picture by a sportsperson on Instagram.  Yes, you read that right. Messi's picture with the Copa America title which he had posted on July 10, has got more than 20 million likes. He had captioned the picture saying, "What a beautiful madness! This is unbelievable! Thank you, God! We are the champions!"

And it doesn't end here. Messi broke a previous record held by none other than Cristiano Ronaldo. Ronaldo had offered his condolences when Argentine legend Diego Maradona tragically passed away last year and that posted garnered 19.8 million likes. He had captioned the picture, "Today I say goodbye to a friend and the world says goodbye to an eternal genius. One of the greatest of all time. Unrivalled majesty, Departed too soon but left a legacy without bounds and a void that will never be filled. Craque, rest in peace. You will never be forgotten."

Messi had a brilliant Copa America where he starred with four goals and five assists- a feat which earned him the Man of the Tournament award. Surprisingly, he had a pretty quiet performance in the final with Angel De Maria's first -half strike sealing the win for his side.

(The above story first appeared on LatestLY on Jul 18, 2021 09:34 PM IST. For more news and updates on politics, world, sports, entertainment and lifestyle, log on to our website latestly.com).