The iconic rivalry that once headlined El Clasico matches in the La Liga would resume once again when Barcelona would host Juventus for the Joan Gamper trophy, ahead of the new season on August 8. 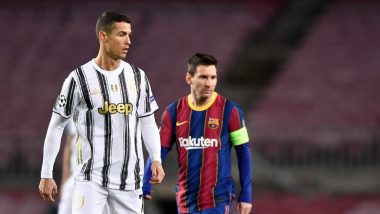 Football stars Lionel Messi and Cristiano Ronaldo could possibly play against each other and that too, very soon! Yes, you read that right. The iconic rivalry that once headlined El Clasico matches in the La Liga would resume once again when Barcelona would host Juventus for the Joan Gamper trophy, ahead of the new season on August 8. The women's teams of both these clubs would face off against each other as well. Camp Nou would host this exciting match and 20 percent of the crowd would be allowed to enter and enjoy the match, owing to the COVID-19 restrictions. Is Lionel Messi Playing At 2020 Tokyo Olympics? Check Complete Argentina Squad For Men's Football Tournament At Summer Games

But wait. Things aren't as simple as it looks like. Messi would have to sign a new contract at Barcelona to make this dream clash between these two stars, possible. The Argentine has been a free agent for some time now and although Barcelona are very positive about the progress of a new contract with the six-time Ballon D' or winner, there has been no update as to when he would once again commit his future to the Catalan club. Football fans would hope that he puts pen to paper really soon and makes this clash possible. Cristiano Ronaldo Shares Post-Workout Picture on Instagram, Check Post

The Joan Gamper Trophy is hosted by Barcelona every year since 1966 to signal the start of the season. Ronaldo's exit from the La Liga has almost made it impossible for football fans to see Messi vs Ronaldo matches anymore. The last time it happened was in 2020 in the Champions League.

(The above story first appeared on LatestLY on Jul 24, 2021 08:07 PM IST. For more news and updates on politics, world, sports, entertainment and lifestyle, log on to our website latestly.com).