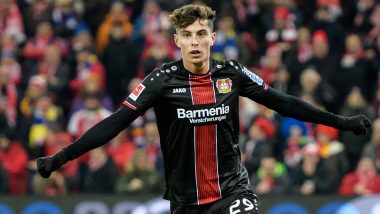 Kai Havertz has taken the world by storm since the Bundesliga’s return from coronavirus suspension, scoring in every game until now. After his explosive start, the 20-year-old has been linked with a move to several European heavyweights such as Bayern Munich and Manchester United, with the latter reported as front runners. Now a man who watches the young prodigy in training every day, Bayer Leverkusen’s assistant coach Marcel Daum, has likened him to Real Madrid and France legend Zinedine Zidane. Kai Havertz and Leroy Sane Wanted at Bayern Munich by Former President Uli Hoeness.

Kai Havertz has experienced a meteoric rise this season and has been the talk of the footballing world in recent weeks. Daum, who has seen the youngster's quality up close at BayArena has said that Havertz is ‘displaying signs’ similar to Zinedine Zidane. Saul Niguez Announces New Club, Puts Manchester United Transfer Rumours to Rest.

‘Everyone is asking about Kai Havertz, if you see him play, it tells you everything.’ Daum told talkSPORT. ‘For me, he has the elegance of Zidane. If you see his movement, he’s very elegant, he’s always calm, he has great passing ability.’ He added.

‘What a lot of people don’t see, because we watch him every day, is that he’s pretty fast. That’s a big bonus. He’s a great player; he’s scoring goals, he’s great in the air and he’s pretty fast. It’s up to him how far he can go. I can’t say he will be the best German player ever, but he has the talent and there are no limits. He’s displaying signs of Zidane.’ Daum continued.

Havertz form has attracted interests from several big clubs, but the 33-year-old believes that Leverkusen is a good place for him to develop. ‘The situation with coronavirus is so strange and so complicated that it’s still open that he will leave us. I don’t know what will happen, but at Bayer, he has the right place to develop his strengths and improve. Bayer won’t sell him for a cheap fee.’ He said.

The German international has hit the ground running since Bundesliga returned on May 18 in empty stadiums, netting five goals in four encounters. The remainder of the season is expected to be played behind closed doors as well.

(The above story first appeared on LatestLY on Jun 03, 2020 08:44 PM IST. For more news and updates on politics, world, sports, entertainment and lifestyle, log on to our website latestly.com).