Napoli vs Inter Milan, Coppa Italia 2019-20: Lorenzo Insigne, Lautaro Martinez And Other Players to Watch Out for Ahead of Semi-Final, 2nd Leg

Football in Italy has been suspended due to the pandemic as players return from the suspension, changes have been made to reduce physical stress on the players. There will be no extra time in the second leg, as teams will go straight to a penalty shootout if cannot be separated at the end of regular period. 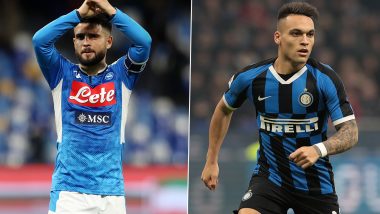 Inter Milan and Napoli will face each other in the second leg of the Coppa Italia semi-final on Saturday. Genaro Gattuso’s men are in pole position at the moment, courtesy of their 1-0 win back in February. The two clubs will return back into action for the first time since the coronavirus-enforced suspension and will be hoping to secure a place in the finals where they will take on the winner of Juventus and AC Milan. Italian Federation Aims to Conclude Serie A 2019-20 by August 20, New Season Gets September 1 Start Date.

Football in Italy has been suspended due to the pandemic as players return from the suspension, changes have been made to reduce physical stress on the players. There will be no extra time in the second leg, as teams will go straight to a penalty shootout if cannot be separated at the end of regular period. Serie A 2019–20 to Resume on June 20, Coppa Italia Ties to Be Played a Week Earlier.

Napoli will be without defensive duo Kostas Manolas and Kevin Malcuit, but other than that have a fully fit squad. Inter Milan also have majority of their players available for this game with Diego Godin the only injury doubt. So ahead of this clash, we take a look at some players who can have a huge impact.

The Argentine has been linked with a move to Barcelona in recent times but is expected to start. He is one of the most important players Antonio Conte has at his disposal. Martinez has scored 16 goals this season and has formed a formidable partnership with Belgian Romelu Lukaku which will be crucial if Inter are to overturn the deficit.

The Napoli captain will be one of the front three deployed by Gattuso for this game and will be leading the attacking cavalry. The 29-year-old has been involved in 15 goals this season and will be looking to add to that tally.

The English international joined Inter Milan in January and has been one of the crucial player’s for Conte. The 34-year-old clearly fits in the Italian manager’s wing-back role and will have a huge responsibly both offensively and defensively. His delivery in the box will be important for Inter’s attacking play.

The Spanish midfielder has enjoyed a fine season and is one of the main controllers in that Napoli midfield. Along with his ability to dictate the tempo of the game, Ruiz also possesses a great goal threat. His goal in the first leg is the difference in the tie.

(The above story first appeared on LatestLY on Jun 12, 2020 11:49 PM IST. For more news and updates on politics, world, sports, entertainment and lifestyle, log on to our website latestly.com).