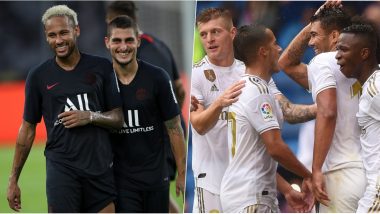 PSG vs Real Madrid, UEFA Champions League Live Streaming Online and Telecast: Paris Saint Germain (PSG) at home against Real Madrid is arguably the pick of the games from matchday 1 of the 2019/20 UEFA Champions League. The Parisians have seen their European ambitions fade away in each of their campaigns since their Qatari owners started to pump in the money. This season too they have a host of international stars in their ranks and the fans have high hopes on the team. For Real Madrid, the last five years have been hugely successful in Europe but last season was a real disaster. The Los Blancos under Zinedine Zidane are hoping for a positive result in Paris that sets a mark for the campaign to follow. You will find live streaming and telecast information related to PSG vs Real Madrid below.

Star strikers Edinson Cavani and Kylian Mbappe are out of the tie with injuries while Neymar who made a return to the squad this weekend is suspended following his social media outburst last season. The absence of the trio is a huge loss for the hosts who are devoid of the skills of their creative players. Mauro Icardi should start as the forward for the Parisians with former Madrid man Angel Di Maria providing width. In midfield, Marco Verratti is the undisputed leader with summer arrival Idrissa Guyeye doubling up the sweeping efforts.

Sergio Ramos and Nacho are suspended for Real Madrid while full-back Marcelo nurses a neck injury that rules him out of the contest. James Rodriguez is now in the scheme of things for Zinedine Zidane and should start along with Gareth Bale who is in fine goalscoring form. Eden Hazard and Karim Benzema complete the sound attacking line-up for the Los Blancos. In the absence of Sergio Ramos, Raphael Varane is the real leader at the back and will need the support of defensive midfielder Casemiro to cut the supply line for PSG.

Placed in Group A of UEFA Champions League 2019-20, PSG and Real Madrid will take on each other in Group Stage match on late September 18 (Wednesday) night. PSG vs Real Madrid will kick off at 12.30 am IST (Indian Standard Time) at Le Parc des Princes, Stadium in Paris.

PSG vs Real Madrid will be telecast by Sony Pictures Sports Network (SPSN) on their television channels - Sony Ten 2 and Sony Ten 2 HD.

Where to Get Free Live Streaming Online of Napoli vs Liverpool, UEFA Champions League 2019-20 Football Match?

Fans can also enjoy the live match action online. Simply log in to Sony Liv app that is providing PSG vs Real Madrid live streaming option. Real Madrid are unbeaten in their previous 4 meetings with PSG and given the quality of the two sides for the game, and it is highly likely they will cancel each other out.

(The above story first appeared on LatestLY on Sep 18, 2019 10:16 PM IST. For more news and updates on politics, world, sports, entertainment and lifestyle, log on to our website latestly.com).