Alexander Szymanowski, Fede, Rodrigo Tarin, Ruben Perez and Marc Navarro are unavailable for the visitors owing to injury. Danish international Martin Brathwaite who made a move from English club Middlesbrough is the one shouldering the bulk of the attacking responsibility of the team. 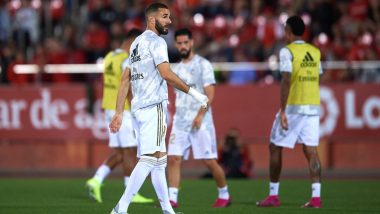 Real Madrid vs Leganes, La Liga 2019 Free Live Streaming Online & Match Time in IST: Real Madrid face the bottom side of the league Leganes in the La Liga looking to keep the pressure on Barcelona and Granada, who lead the Los Blancos currently. It has not been smooth sailing for Zinedine Zidane and his Madrid squad with consistency being an issue. Despite the big-name arrivals in summer, there is a lot of speculation surrounding Zidane, and he will love to put them to rest with a victory at home. Leganes managed their first win of the season in their previous encounter, but they still have just 5 points in the kitty which needs urgent addressal. Football fans in India who are searching for Real Madrid vs Leganes live telecast and live online streaming details; you will find all the match-related information below.

Alvaro Odriozola is suspended for the tie after receiving his marching orders in the game against Mallorca. Gareth Bale was playing well for Madrid but has now suffered another injury setback. It has been a pattern of sorts for the Welshman to miss several crucial games for the Los Blancos owing to injury. There is no place in the team for Luka Modric as Toni Kroos, Casemiro and Federico Valverde seems to be the first choice combination at the moment for Zidane. Going forward, all eyes will be on Eden Hazard who has not lit the La Liga as was supposed to so far. It is the old warhorse Karim Benzema that has done well for the hosts, and he will be expected to come up with the goals again.

Alexander Szymanowski, Fede, Rodrigo Tarin, Ruben Perez and Marc Navarro are unavailable for the visitors owing to injury. Danish international Martin Brathwaite who made a move from English club Middlesbrough is the one shouldering the bulk of the attacking responsibility of the team. Midfield is mediocre for Leganes, and this is where their problems lie. Christian Rivera in the central role will need a world-class performance to stop the superior Madrid midfield.

Real Madrid vs Leganes will take place on late October 30 night in India. The La Liga 2019-20 match will kick off at 1.45 am IST (Indian Standard Time) at Santiago Bernabéu, a stadium in Madrid, Spain.

Spanish La Liga has no official broadcaster in India, which means there will be no live telecast of any match this season. Though Sony Pictures Sports Network did previous telecast season in the Indian subcontinent.

Where to Get Free Live Streaming Online of Real Madrid vs Leganes, La Liga 2019-20 Football Match?

There is no official broadcaster of Spanish La Liga, which means there is no official live streaming options available like Hotstar or Sony Liv app. However, you can still enjoy Real Madrid vs Leganes match online via live streaming on GHD Sports as well as La Liga's official Facebook page. You can also follow LatestLY for live football score updates. Despite not being in the best of forms, Real Madrid should have enough quality to overcome a side which is in a real spot of bother at the moment.

(The above story first appeared on LatestLY on Oct 30, 2019 11:10 PM IST. For more news and updates on politics, world, sports, entertainment and lifestyle, log on to our website latestly.com).