he first leg at Etihad was a fairly open contest with both the sides attacking from the word go. Both Carlo Ancelotti and Pep Guardiola understand the perils of keeping their defence prone to counter and we just might see a change in strategy in Madrid. 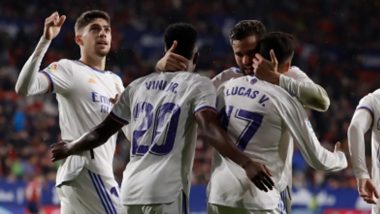 Real Madrid and Manchester City clash in the second leg of their UEFA Champions League semi-final with the tie delicately poised at 4-3. The winner of this clash takes on Liverpool in the finals of the competition, who won a thriller against Villareal last night. The first leg at Etihad was a fairly open contest with both the sides attacking from the word go. Both Carlo Ancelotti and Pep Guardiola understand the perils of keeping their defence prone to counter and we just might see a change in strategy in Madrid. The clubs are in top form this season with Real Madrid securing a league title while Manchester City are also edging closer to one. Real Madrid vs Manchester City: David Alaba Likely To Miss UCL 2021-22 Semifinal Clash Through Injury.

David Alaba is set to miss the high profile game for Real Madrid owing to an injury and joins Eden Hazard and Gareth Bale on the sidelines. His absence means Nacho Fernandes and Eder Militao are set to be the centre back pairing for the hosts. Luka Modric, Casemiro and Toni Kroos make the midfield trinity with Karim Benzema leading the attack. Vinicius Junior looked sublime in the first leg and Manchester City will have to find a way to keep him quiet. Villarreal 2-3 Liverpool, UCL 2021-22: Luis Diaz Leads Comeback As Reds Secure Finals Berth (Watch Goal Video Highlights).

Joao Cancelo will be inducted into the starting eleven for Manchester City after missing the home leg courtesy of suspension. Kyle Walker has began training with the first team but will undergo a late fitness test to take part in the match while John Stones misses out. Kevin de Bruyne holds the key for the visitors in midfield and it will be his form that determines if they progress or not.

Real Madrid vs Manchester City clash in UEFA Champions League 2021-22 will be played at the Santiago Bernabeu Stadium in Madrid on May 05, 2022 (Thursday). The game has a scheduled time of 12:30 am IST (Indian Standard Time).

Sony Pictures Network are the official broadcasters of UEFA Champions League 2021-22 in India and will telecast the games live on its channels. Fans can tune into Sony Sports HD/SD channels to watch the live telecast of Real Madrid vs Manchester City on TV.

Real Madrid will dominate possession but Manchester City will likely kill the tie on the counter.

(The above story first appeared on LatestLY on May 04, 2022 03:10 PM IST. For more news and updates on politics, world, sports, entertainment and lifestyle, log on to our website latestly.com).