Russia vs Denmark, UEFA Euro 2020 Live Streaming Online & Match Time in IST: How to Get Live Telecast of RUS vs DEN on TV & Free Football Score Updates in India 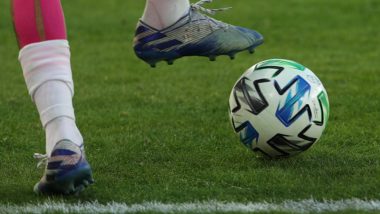 Russia will be eager to book their place in the next round of Euro 2020 when they take on Denmark in their final group stage match. The Russians started off on a poor note with 3-0 bashing at the hands of Belgium but improved considerably in the win over Finland. They currently occupy the second spot in Group B currently and they face a team who are yet to get their first points which will give their fans hope. Denmark’s tournament has been marred by Christian Eriksen’s health scare but they did give Belgium a run for their money. They have a good bunch of technically gifted players but it’s a shame they have lost both their games. Euro 2020 Day 11 Schedule: Today's Matches With Kick-Off Time in IST, Upcoming Fixtures and Updated Points Table

Mario Fernandes has been ruled out of the game after suffering a back injury. The right back was hospitalised after landing awkwardly in the last game but thankfully prevented spinal cord damage. Artem Dzyuba and Aleksei Miranchuk are the two players managing the attack for the Russians with Roman Zobnin the sweeper in midfield. Aleksandr Golovin will push up and try and join the front players with every opportunity possible.

Denmark have a decent defensive line-up comprising of Andreas Christensen, Simon Kjaer and Jannik Vestergaard. Pierre-Emile Hojbjerg is the midfield dynamo for the Danes and is well known for his crunching tackles. Yussuf Poulsen is the only player to score a goal in the tournament so far Denmark and he will need to be at his best again. The RB Leipzig man will have the support of Barcelona’s Martin Braithwaite in the attacking third.

When is Russia vs Denmark, UEFA EURO 2020 Match? Date, Time and Venue Details

Sony Pictures Networks India is the official broadcaster of UEFA EURO 2020 in India. It will broadcast Russia vs Denmark, live match on Sony Ten 2 in English, Sony Ten 3 in Hindi, Sony Ten 4 in Tamil and Telugu, Sony Six in Bengali and Malayalam.

The live online streaming of Russia vs Denmark, UEFA EURO 2020 football match will be available on the SONY LIV app and website. JIO will also provide the online streaming of the game for its users on the JIO TV app. Denmark and Russia will keep things tidy at the back and the game could well be decided by a moment of brilliance from either sets of players.

(The above story first appeared on LatestLY on Jun 21, 2021 05:48 PM IST. For more news and updates on politics, world, sports, entertainment and lifestyle, log on to our website latestly.com).