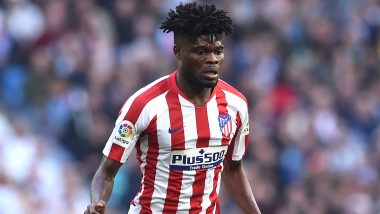 Arsenal’s pursuit of Atletico Madrid midfielder Thomas Partey has suffered a huge blow after the Spanish club rejected yet another bid from the Premier League side. The Gunners have identified the Ghanaian player as their top transfer target but will need to up their offer if they want to acquire the services of the 27-year-old. Partey has been an Atletico Madrid regular has made over 100 appearances for them in La Liga. Arsenal Would Sell Mesut Ozil ‘Tomorrow’ if They Find Right Offer, Says Gunners’ Legend Tony Adams.

According to a recent report from The Guardian, Atletico Madrid have rejected yet another offer by Arsenal to sign their star midfielder. Due to the financial effects of the coronavirus pandemic, the Gunners are hoping to reduce the Ghanaians transfer fee but the Spanish side will not accept any offer that is less than the midfielders €50m (£45.5m) release clause. Bukayo Saka Signs Long-Term Deal With Arsenal.

Arsenal first registered their interest in the 27-year-old midfielder in spring but so far an attempt to reduce Thomas Partey’s fee have met a dead end despite the player being reluctant to sign a new contract with the Rojiblancos.

It is understood that a bid of €25 million plus a player, most probably Matteo Guendouzi, was rejected by the Spanish club on Monday, with Arsenal already stating that they are unwilling to pay the Ghanaian midfielder’s release clause in full.

Diego Simeone and Atletico Madrid camp are desperate to keep hold of the midfielder who has been with them since 2013. The 27-year-old has been an integral part of the Rojiblancos set-up in recent years. The Ghanaian player still has two years on his current contract.

(The above story first appeared on LatestLY on Jul 28, 2020 11:50 AM IST. For more news and updates on politics, world, sports, entertainment and lifestyle, log on to our website latestly.com).