Ukraine vs Austria, UEFA Euro 2020 Live Streaming Online & Match Time in IST: How to Get Live Telecast of UKR vs AUT on TV & Free Football Score Updates in India

Ukraine vs Austria Euro 2020 match will be played on June 20, 2021 (Sunday) at the National Arena, in Bucharest, Romania. The match is scheduled to start at 09:30 pm IST (Indian Standard Time). 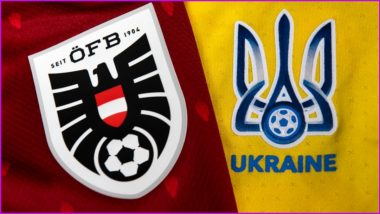 Ukraine and Austria have shown form in patches in Euro 2020 so far and their clash at the National Arena in Bucharest will decide who clinches the round of 16 berth from Group C. Both the sides have lost to the Dutch and beaten North Macedonia in their group stage games and it all boils down to the final fixture. Andriy Shevchenko’s team have looked good going forward but their static midfield coupled with a dodgy defence has been a problem. Austria have looked far from their usual self in the tournament and were poor in the previous game. They will be ager to improve against Ukraine in pretty much all departments. North Macedonia vs Netherlands, UEFA Euro 2020 Live Streaming Online & Match Time in IST: How to Get Live Telecast of MKD vs NED on TV & Free Football Score Updates in India.

Ukraine have an injury concern at the moment with Oleksandr Zubkov a doubt for the Austria game. The Ferencvaros midfielder suffered a knock against the Dutch and has not recovered yet. Andriy Yarmolenko and Roman Yaremchuk were both on the scoresheet against North Macedonia and will be key in the attacking third again. Taras Stepanenko is the one who holds the team together with his slick passing game in midfield.

Marko Arnautovic is set to start for Austria after missing the last game courtesy a disciplinary issue. The former West Ham United player went overboard with his celebration in their opener and was banned thereafter for a game. David Alaba, who is set to move to Real Madrid in the summer, has had a very subdued tournament and needs to lift his game. Marcel Sabitzer is another quality player in their rank that can cause Ukraine a lot of trouble. Euro 2020 Day 11 Schedule: Today's Matches With Kick-Off Time in IST, Upcoming Fixtures and Updated Points Table

When is Ukraine vs Austria, UEFA EURO 2020 Match? Date, Time and Venue Details

Ukraine vs Austria Euro 2020 match will be played on June 21, 2021 (Monday) at the National Arena, in Bucharest, Romania. The match is scheduled to start at 09:30 pm IST (Indian Standard Time).

Sony Pictures Networks India is the official broadcaster of UEFA EURO 2020 in India. It will broadcast Ukraine vs Austria, live match on Sony Ten 2 in English, Sony Ten 3 in Hindi, Sony Ten 4 in Tamil and Telugu, Sony Six in Bengali and Malayalam.

The live online streaming of Ukraine vs Austria, UEFA EURO 2020 football match will be available on the SONY LIV app and website. JIO will also provide the online streaming of the game for its users on the JIO TV app. Ukraine have beaten some big names in the past year or so and there is a feeling they will be able to get the job done against Austria.

(The above story first appeared on LatestLY on Jun 21, 2021 05:29 PM IST. For more news and updates on politics, world, sports, entertainment and lifestyle, log on to our website latestly.com).