Gabbi Tuft, Former WWE Wrestler AKA Tyler Reks, Comes Out as a Transgender

Tuft retired from wrestling in 2014 after a seven-year stint with WWE during which made appearances On WWE Raw, SmackDown as well as Wrestlemania. After bidding goodbye to wrestling, Tuff spent her time with her wife Priscilla and their daughter. She also became a fitness coach and motivational speaker after launching a fitness website. 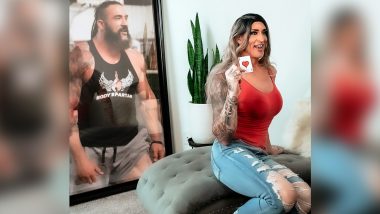 Former WWE superstar Gabbi Tuft, who wrestled under the ring name Tyler Reks, came as transgender. She took to social media to reveal to her fans through an emotional note before her transition. “This is me. Unashamed, unabashedly me,” she captioned the post. “This is the side of me that has hidden in the shadows, afraid and fearful of what the world would think; afraid of what my family, friends, and followers would say or do.” Tyler Reks intrigued fans with her beast personality and several gimmicks during her time in wrestling. Super Bowl 2021: Roger Federer Congratulates Tom Brady and His Wife Gisele Bundchen After Tampa Bay Buccaneers Defeat Kansas City Chiefs to Lift the Title.

“I am no longer afraid and I am no longer fearful,” she wrote. “I can now say with confidence, that I love myself for WHO I am,” she said in the emotional letter to her followers. Tuft retired from wrestling in 2014 after a seven-year stint with WWE during which made appearances On WWE Raw, SmackDown as well as Wrestlemania. Valentine's Day 2021 Special: Virat Kohli and Anushka Sharma Love Story, 7 Photos That Depict Their Romantic Journey.

“The previous eight months have been some of the darkest of my entire life. The emotional turmoil of being transgender and having to face the world has almost ended me on multiple occasions. However, the day I stopped caring about what other people thought, was the day I truly became limitless and allowed my authentic self to come into the light,” she said in the Instagram post.

After bidding goodbye to wrestling, Tuff spent her time with her wife Priscilla and their daughter. She also became a fitness coach and motivational speaker after launching a fitness website with other wrestlers. “My loving wife, family, and closest friends have accepted me for who I am. To them, I am forever grateful. Your support along the way means more than you will ever know,” she wrote.

Gabbi Tuft Talks About Life As a Transgender

“I don’t expect everyone to agree or understand. It’s not my place to change any of your core beliefs. Just know that the outer shell may change, but the soul remains the same.”

(The above story first appeared on LatestLY on Feb 08, 2021 12:57 PM IST. For more news and updates on politics, world, sports, entertainment and lifestyle, log on to our website latestly.com).