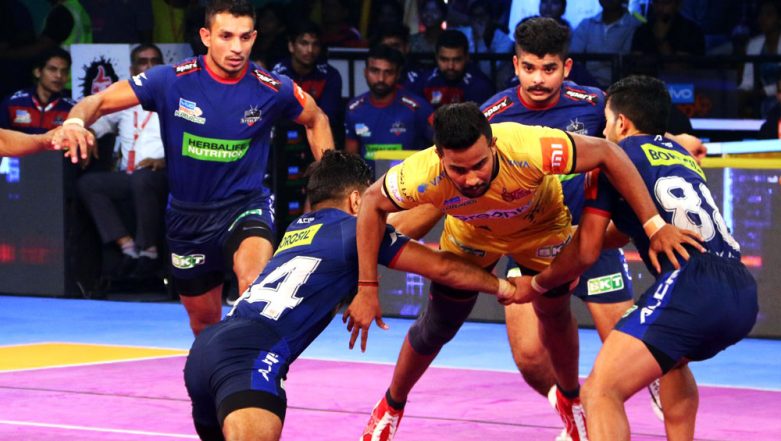 The second match on the night of Christmas at Pro Kabaddi League (PKL) Season 6, will witness a battle between Bengal Warriors and Telugu Titans, on Tuesday. Bengal Warriors have already qualified for the playoffs; however, Telugu Titans have a slim chance to be eligible if they win with a significant margin. If you are searching for the live telecast and online streaming information of the PKL 2018-19 match, then you can find the details here.

In their head-to-head record, both the teams have played 10 times in the PKL history. In those, Bengal Warriors have had the dominant hand as they won on 7 occasions; whereas on the other, Telugu Titans they have succeeded in only 3 games. Pro Kabaddi League 2018-19 Schedule Timetable: Full Fixtures, All Teams' Match Dates, Timings, and Venue Details of PKL Season 6.

Will Telugu Titans make their case to qualify or will Bengal Warriors continue their dominance? Come Tuesday; the Zone B contest is going to be an exciting watch for the fans. PKL Season 6 Points Table and Rankings: Puneri Paltan Beat Hyderabad Steelers to Top Points Table.

The second contest on the night of Christmas, i.e. December 25, will witness Bengal Warriors and Telugu Titans clashing in an intense battle on Tuesday. The match will be played at Netaji Subhash Chandra Bose Indoor Stadium in Kolkata, and the start time is 9.00 pm (IST).

Where to watch the Live Telecast of Bengal Warriors vs Telugu Titans, PKL 2018-19 match, on TV?

Star Sports Network holds the official broadcasting rights of the PKL Season 6, in India. The fans will be able to see the live match telecast on Star Sports 1 Hindi and Star Sports 2 channels.

How to watch the online streaming of Bengal Warriors vs Telugu Titans, PKL 2018-19 match, in India?

The PKL match can be seen via online streaming, too, on Star Sports’ live streaming service, i.e. Hotstar. They can also catch the live updates of Bengal Warriors vs Telugu Titans match, by clicking here.