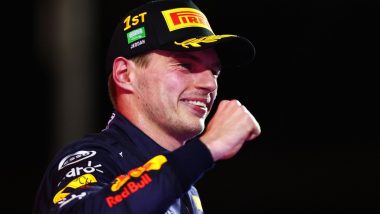 Barcelona, May 22: Defending Drivers' World Champion Max Verstappen of Red Bull won an action-packed Spanish Grand Prix that witnessed pole-sitter Charles Leclerc retiring from a comfortable lead. Sergio Perez took second place to secure Red Bull's first one-two of the season, while George Russell finished third for Mercedes, having been involved in an epic bout with eventual winner Verstappen. Soaring temperatures weren't the only problem on Sunday; huge gusts into Turn 4 caused both Carlos Sainz and Verstappen to go off track and drop down the order early on. That left Leclerc with a comfortable lead and a free pit stop by Lap 22, and it seemed a straightforward victory for Ferrari - until Leclerc's engine gave way on Lap 27. Before that, Russell and Verstappen (whose DRS was malfunctioning) had sparred - going wheel-to-wheel on numerous breath-taking occasions - for P2, according to a report on the Formula 1 website. Kylian Mbappe Sends a Message To Real Madrid After Renewing Contarct With PSG (See Post).

Even as they were battling for the lead, Verstappen pitted a second time from mediums back to softs on Lap 29 and caught up to Russell's tail by Lap 37 when Russell swapped for another set of mediums. Sergio Perez was briefly in the lead now - but pitted soon after for a new set of mediums. Covering off Perez's alternate strategy and tyre life advantage, Verstappen too was pitted for softs on Lap 45, a new set of mediums now giving him a prime opportunity at prying the lead from Perez. Verstappen was allowed past and eventually won by 13 seconds; Perez took P2 and fastest lap having stopped for softs late on.

Russell finished third despite having fended off Verstappen's threats for much of the race, while Sainz finished fourth despite having dropped outside the top 10 early on after his Turn 4 spin. Former multiple-times champion Lewis Hamilton passed Sainz for P4 with a brilliant move at Turn 1 with five laps left, but then dropped to P5 having been told to lift off by his Mercedes team. Valtteri Bottas's soft-medium-medium strategy saw him lose out to soft-tyred finishers Sainz and Hamilton, the Finn taking a still-solid P6 finish for Alfa Romeo. In seventh was Esteban Ocon, up to five places for Alpine with two soft-tyred stints. Lando Norris mirrored the Frenchman's strategy but finished a few seconds behind in P8 from P11 for McLaren. Alpine's Fernando Alonso (from the back of the grid) and AlphaTauri's Yuki Tsunoda (from P13) rounded out the top 10 on the same soft-medium-soft-soft gambit, the report said. Mario Balotelli Scores Sensational Rabona Goal On Final Day Of Super Lig 2021-22 Season (Watch Video).

Sebastian Vettel's two-stop strategy saw him finish 11th for Aston Martin, 14th-placed Mick Schumacher facing a similar fate as he dropped out of the points late on for Haas with Daniel Ricciardo and Pierre Gasly promoted to P12 and P13 respectively. Late contact with Gasly at Turns 1-2 put Lance Stroll 15th for Aston Martin. Kevin Magnussen made contact with Hamilton early on at Turn 4 and ended up 17th - between the Williams drivers - having opted for a soft-medium-hard strategy. At Williams, Alex Albon finished 18th and Nicholas Latifi 16th. Along with Leclerc, Alfa Romeo's Zhou Guanyu was the other retiree in Spain.

(The above story first appeared on LatestLY on May 23, 2022 10:20 AM IST. For more news and updates on politics, world, sports, entertainment and lifestyle, log on to our website latestly.com).