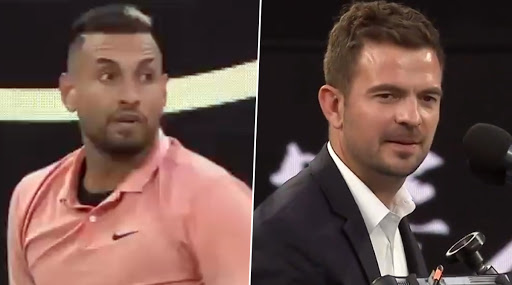 Nick Kyrgios and Rafael Nadal meet each other in the fourth round of the ongoing Australian Open 2020 on January 27, 2020 (Monday) at Rob Laver Arena. The two have met each other on seven previous occasions with Nadal leading the head-to-head contest marginally by 4-3. The Spaniard and the Aussie have an intense rivalry and if the contest wasn’t going to be fiery enough, Kyrgios added even more zest ahead of this clash during his second-round match against Gilles Simon when he mimicked Rafael Nadal’s pre-service action. Rafael Nadal vs Nick Kyrgios, Australian Open 2020, 4th Round Free Live Streaming Online.

During the second set of the clash against Gilles Simon, Nick Kyrgior was called out for time violation by the chair umpire. Frustrated by this call, the Australian mimicked his long-time rival, Rafael Nadal’s pre-serve action – ranging from putting his hair behind the ears to picking out the wedgie – which also drew a laugh from umpire Jaume Campistol. Kyrgios opponent on that night, Simon also got on the act with his best Nadal impersonation when he was called out for time violation in the third set, much to the Aussie's amusement. Australian Open 2020: Vintage Stan Wawrinka Upsets Daniil Medvedev to Make Open Quarters.

Rafael Nadal was told about this incident after his victory over Federico Delbonis to which the Spaniard replied ‘I really don’t care. I am here to play tennis. Honestly, I don’t care at all. It was funny, good. That is it.’ Nick Kyrgios responded to this statement on Saturday. ‘Regardless, if we don’t like each other or whatever, I think there’s a layer of respect. He’s one of the greatest of all time.’ He added. ‘There’s a layer of respect that we both have for each other. Doesn’t necessarily mean we like each other.’ The Australian added.