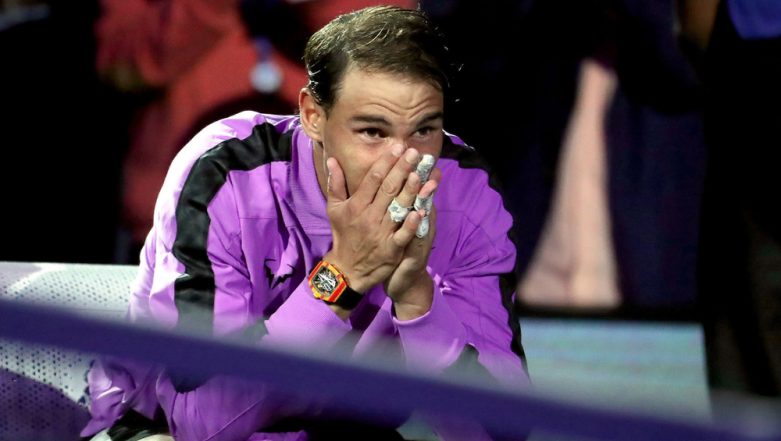 Rafael Nadal moved one major title shy of equaling Roger Federer’s all-time men’s record of 20 Grand Slam titles after edging out Daniil Medvedev in an epic five-set clash of US Open 2019 final. The Spaniard, now with 19 Grand Slam titles, sat in his chair tired and exhausted but relived after another gruelling final. Tears were rolling down his eyes as the large video screen at the Arthur Ashe Stadium in Flushing Meadows took him – and everyone present there – on a walk down memory lane by showing the highlights of a remarkable career with a stop at every Grand Slam title Nadal had achieved. Daniil Medvedev Praises Rafael Nadal After Spaniard Clinches US Open 2019 Title, Says 'The Way You Are Playing Is a Big Joke'.

Then as the live camera panned into him, Nadal broke down into tears and hid his face into his hands even as the crowd roared and applauded him for his achievements. The sobbing soon gave away to weeping and Nadal couldn’t hide his emotions as he stared at the giant screen which rolled the highlights of an illustrious 15-year-old Tennis career full of trophies and injuries, disappointments and comebacks.

Nadal overcame the fifth-seeded Russian 7-5/ 6-3/ 5-7/ 4-6/ 6-4 in a scintillating final that lasted for four hours and 49 minutes and fell just five minutes shy of matching the longest US Open final. It was his fourth major in New York making him the first-ever men to win five Grand Slam titles after turning 30. But one would expect that the second oldest US Open champion – at 33 years of age – and a proud owner of 19 majors would have made it a habit of celebrating Grand Slam titles as if it was regular business.

But Nadal’s emotions on securing the victory and the tears that followed with the career highlights showed how much it meant to the Spaniard. Nadal called it one of the most emotional moments of his career. “The last three hours of the match were very, very intense, both mentally and physically,” said Nadal at the presentation ceremony. “At the end, with the video and the crowd, it was amazing. All these facts made the moment super special.”