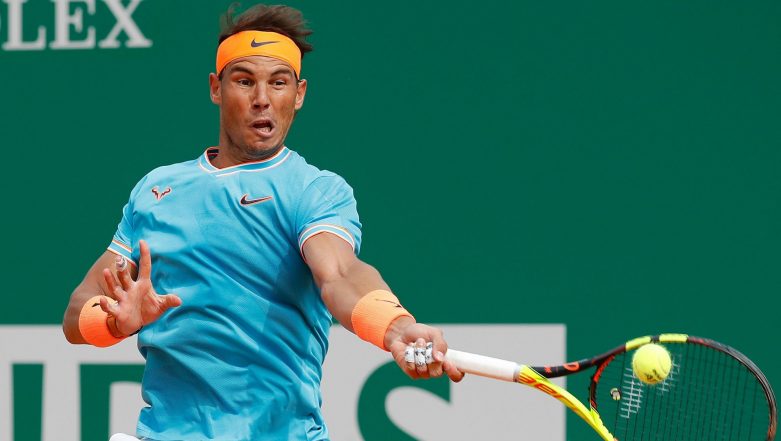 Madrid, May 12: Spain's Rafael Nadal was eliminated from the Mutua Madrid Open semi-final after he was stunned by Alexis Tsitsipas of Greece 6-4, 2-6, 6-3 here. On Saturday, the 20-year-old Greek produced a performance of passion and grit as he booked his place in the final in Madrid for the first time in his young career. Rafael Nadal Blows Away Switzerland’s Stan Wawrinka to Reach Madrid Open 2019 Semis.

Tsitsipas will be bidding to win his third title of the season following his victories in Marseilles and Estoril last week, and has now won eight consecutive matches since his tournament win in Portugal, reports EFE news agency. Playing on his favourite surface in front of his home crowd and having only dropped one set all week, world number two Nadal was odds-on to set up a mouth-watering match against Djokovic, but Tsitsipas had other plans.

He brought an energy and aggression that the 32-year-old Nadal could not handle, despite having defeated the Greek on the three previous occasions they had faced off. Madrid Open: Nadal Enters Semi-finals; Thiem Knocks out Federer.

Nadal was uncharacteristically wobbly on serve, and was broken six times on Saturday, having seen his serve broken just once all week leading up to the semis. Three of those breaks came in a difficult first set for the home favourite, but Nadal was hugely impressive during the second set after which it appeared Tsitsipas had finally run out of energy following a taxing fortnight.

But the youngster found extra reserves to force the victory in the deciding set as Nadal saved three match points before Tsitsipas sealed a famous win after a gruelling two hours and 35 minutes. Tsitsipas Stuns Nadal to Set Up Madrid Final with Djokovic.

"It means the world," Tsitsipas said after the match. "I am really happy that I proved myself today. I played one of my best games this year. Today's victory is an unbelievable feeling." He moves on to the final on Sunday to meet Novak Djokovic, who had earlier edged past Austria's Dominic Thiem 7-6 (2), 7-6 (4).