We just witnessed an amazing episode WWE Raw September 7, 2020, where we saw Drew McIntyre return after a gap of two weeks after recovering from the injury. The WWE Champion took revenge on Randy Orton by hitting him with a total of three claymore kicks throughout the night. 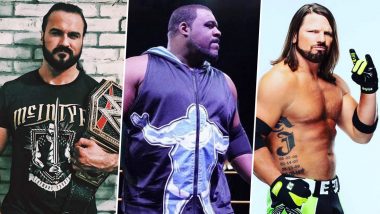 We just witnessed an amazing episode WWE Raw September 7, 2020, where we saw Drew McIntyre return after a gap of two weeks after recovering from the injury. The WWE Champion took revenge on Randy Orton by hitting him with a total of three claymore kicks throughout the night. WWE fans were also shocked to see Bayley brutally assaulting her best friend Sasha Banks on this past week episode of SmackDown. We also saw the return of Jey Uso who challenged his own cousin Roman Reigns for Universal title match at Clash of Champions 2020. Meanwhile, you have arrived at the right platform, if you are looking for top-five WWE news, which includes from Keith Lee making request to Drew McIntyre, details about AJ Styles getting an offer from AEW Dynamite and much more. WWE Raw Results Sept 7, 2020 Results and Highlights: Drew McIntyre Takes Down Randy Orton With Claymore Kick, Dominik Mysterio Defeats Buddy Murphy to Register His First Singles Victory.

In the recently-concluded episode of Raw, Keith Lee was booked in a singles match against Randy Orton. The match ended in disqualification as The Scottish Psychopath interfered and hit The Viper with claymore kick. The Limitless One is not happy with his friend's interference as it stole the limelight from him during the match. Check out the message below by Keith Lee for Drew McIntyre.

Keith Lee not happy about Drew McIntyre getting involved in his matches. Keith sent Drew a message during Raw Talk. #WWERaw https://t.co/KVT5z44vXt

In the recently-concluded episode of Raw, we saw the Retribution speak for the very first time. The destructive faction spoke during Nia Jax vs Ruby Riot and Liv Morgan 2 on 1 handicap match. During this segment, suddenly there was darkness, then Retribution logo appeared on screen and then a member started to speak and claimed that the ThunderDome is only a facade. Another member said they were driven to destroy, to lay waste to every superstar and fan.

"The darkness of RETRIBUTION will seep into the pores of every Superstar and all of your so-called universe."#WWERaw pic.twitter.com/tUCd79PuFS

AEW wrestler Matt Jackson revealed that AJ Styles was almost about to leave WWE and make a debut on AEW Dynamite first episode which aired on October 2, 2019. The AEW wrestler revealed this while speaking on the Talk N' Shop Patreon podcast. Matt further added that WWE got wind of this news and immediately offered Styles with five years lucrative contract which The Phenomenal One couldn't refuse. Meanwhile, AJ Styles will be seen appearing on WWE shows till 2024, maybe after that we can see him in AEW.

4. Sasha Banks Reveals When She Wants to Become a Mother

We recently saw Becky Lynch get pregnant after getting into a relationship with Seth Rollins. Now 28 years old Sasha Banks reveals her plan to become a mother on while speaking to D-Von Dudley’s Table Talk. The Legit Boss did mention that pregnancy is not on her mind on an immediate basis, however, when the time is right the universe will let her know when it’s time to start having children.

5. Vince McMahon Wants Bray Wyatt to be Booked For WrestleMania 37

As per Dave Meltzer of Wrestling Observer Newsletter, Vince McMahon has saved 'The Fiend' Bray Wyatt for WrestleMania 37 to face Roman Reigns for Universal Champion. Meanwhile, WWE has booked Jey Uso as an opponent for Roman Reigns for Clash of Champions 2020. Also, there will be few more filler matches in the remaining months till WrestleMania for Roman Reigns. As of now, Bray Wyatt will be used in a different storyline. Stay tuned with LatestLY for more news and updates from WWE.

(The above story first appeared on LatestLY on Sep 09, 2020 09:01 AM IST. For more news and updates on politics, world, sports, entertainment and lifestyle, log on to our website latestly.com).