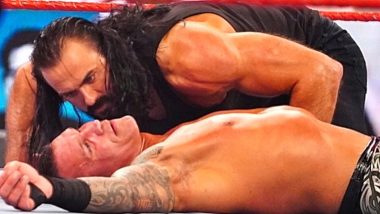 WWE Raw September 7, 2020 episode took place at the Amway Center in Orlando, Florida which saw the return of the world champion Drew McIntyre. The Scottish Psychopath took down Randy Orton with the claymore kick and hence got the much-needed revenge. We also witnessed Dominik Mysterio registering his first-ever singles victory on the red brand in a street-fight against Buddy Murphy. Apart from this, we saw amazing action from Raw Underground. Meanwhile, you have arrived at the right platform, if you are looking for WWE Raw Sept 7, 2020 results and highlights. WWE Raw Results Aug 31, 2020 Results and Highlights: Randy Orton Becomes Number One Contender to Face Drew McIntyre at Clash of Champions For World Title Match (View Pics)

Drew McIntyre went on to give Randy Orton total three claymore kick throughout the night including the one during's The Viper match against Keith Lee. The Scottish Psychopath took perfect 'Eye for an eye' revenge against Orton as The Legend Killer gave three punt kick to McIntyre couple of weeks back. Speaking of Dominik Mysterio' street fight against Buddy Murphy, we saw some amazing action during that match. Dominik yet again impressed viewers with his amazing moves and we even saw the entire Mysterio family come out and punish Murphy with kendo stick strikes.

Now let's speak of women's division, Riot Squad faced Shayna Baszler in two on one handicap match which ended in no contest. Nia Jax was ringside to support Queen of Spade. Baszler and Jax will defend their Women's Tag Team Champion against Riot Squad at WWE Clash of Champions 2020. We saw Peyton Royce defeats Billie Kay by pinfall. Mickie James who has challenged Asuka for WWE Raw Women's Championship teamed up with her to face Natalya and Lana. Asuka lock from Asuka on Lana help register the win. We saw The Hurt People which defeat Ricochet, Apollo Crews and Cedric Alexander. In this match, Cedric turned heel and join The Hurt Business.

Cedric Alexander in The Hurt Business

Will The IIconics Continue to be Friends?

Former tag team partners went head to head, and @peytonroycewwe came out victorious! Will the #IIconics continue to be best friends after this?? #WWERaw

@dmcintyrewwe gets some much needed revenge on @randyorton!! #WWERaw

Fans will now eagerly wait for the upcoming episode of Raw where Asuka will defend her Raw Women's Championship against Mickie James. Stay tuned with LatestLY for more updates and news from WWE.

(The above story first appeared on LatestLY on Sep 08, 2020 10:38 AM IST. For more news and updates on politics, world, sports, entertainment and lifestyle, log on to our website latestly.com).