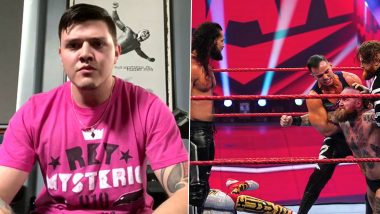 On the show which was billed as “retirement night” of WWE legend Rey Mysterio, ambiguity prevailed over his fate the “Master of 619” did not reveal whether he would ever return to the ring or not. In a video clip which featured Mysterio, he could be heard as saying that he is not sure about the future. “I may or may not ever return,” he said, a week after being brutally ambushed by ‘Monday Night Messiah’ Seth Rollins. Mysterio’s son Dominik, who also appeared in the clip, vowed to exact revenge on behalf of his father. In a message addressed to Rollins, he said: “An eye for an eye”. Here’s the complete results and highlights from the June 1, 2020 episode of WWE Raw. WWE Raw May 25, 2020 Results and Highlights: Apollo Crews Defeat Andrade to Become United States Champion; Drew McIntyre Gets Into Brawl With Bobby Lashley (View Pics)

The show's opening match succeeded a promo cut by Rollins over the "retirement" of Mysterio. A furious Black intervened in the promo in which Rollins credited him for retiring the luchador. In the match which followed, Rollins' aides tried to cause advantage to the former champion. To even the odds, Humberto Carrillo arrived at the scene and aided Black to score a pinfall win.

Dominik Says 'An Eye For an Eye' to  Seth Rollins

Among other major updates from the show, Charlotte Flair ended up defeating Asuka by count-out, Nia Jax defeated Kaira Sane and R-Truth def. Rob Gronkowski to win the 24/7 Championship. In the main event, WWE champion Drew Mcintyre scored a win against MVP. But, following the match, he was assaulted by his Backlash challenger Lashley.

(The above story first appeared on LatestLY on Jun 02, 2020 01:40 PM IST. For more news and updates on politics, world, sports, entertainment and lifestyle, log on to our website latestly.com).