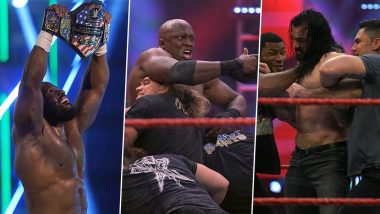 WWE Raw May 25, 2020, took place at the Performace Center in Orlando, Florida and this time the Monday night episode was dedicated to Memorial Day. Also, this week on Raw had a few audiences from NXT and Performance Center talents who were sitting behind hockey glass as per social distancing guidelines. We witnessed a new United States Champion crowned on Raw, as Apollo Crews defeated Andrade to win the title. Apart from that, we saw WWE Champion Drew McIntyre got into a brawl with Bobby Lashley, whom he will face for title match at Backlash. Meanwhile, you have arrived at the right plate, if you are looking for results and highlights of WWE Raw May 25, 2020 episode. WWE Raw May 18, 2020 Results and Highlights: Edge vs Randy Orton at Backlash Confirmed; Drew McIntyre Defeats King Baron Corbin (View Pics)

Apollo Crews won his first singles championship in WWE, beating Andrade to capture the United States championship. Crews took perfect revenge on Andrade, as he was injured by former US Champion during Money in the Bank match which cost him the match. The other most catchy moment of the show was when during Kevin Owens show Asuka was challenged by Charlotte Flair, Natalya and Nia Jax. The three challengers then fought in a triple threat match on the same show to become number one contender for Raw Women's Championship. Nia Jax won the match and now she will face Raw Women's Champion Asuka at Backlash. Drew McIntyre who wanted to put his hands on Bobby Lashley, came to the rescue of The Street Profits during their tag team match against MVP and The All-Mighty. McIntyre and Lashley got into a severe fight as the officials had to come out and stop the two wrestlers. Here’s Look at Five Biggest Wins of Roman Reigns in WWE (Watch Videos)

Drew McIntyre and Bobby Lashley Got Into Brawl

The animosity between @dmcintyrewwe and @bobbylashley just reached a whole new level. #WWERaw

Asuka Got Her Challengers During The KO Show

Rey Mysterio to Retire Next Week

On this past episode of Raw, Seth Rollins applauded the victory of Austin Theory and Buddy Murphy over Aleister Black and Humberto Carrillo in a tag team match. The Monday Night Messiah even went on to put assault Carrillo after the match. Next week on Raw, Seth Rollins will face Aleister Black in a one on the match and also host the retirement ceremony of Rey Mysterio. Stay tuned to LatestLY for more news and action from WWE.

(The above story first appeared on LatestLY on May 26, 2020 11:30 AM IST. For more news and updates on politics, world, sports, entertainment and lifestyle, log on to our website latestly.com).