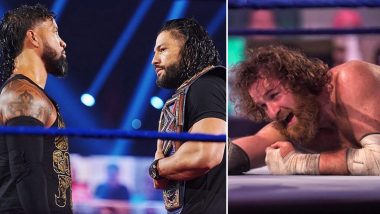 WWE SmackDown October 2, 2020 episode took place at Amway Center in Orlando, Florida. This episode of the blue brand came just after the conclusion of WWE Clash of Champions 2020. The show kickstarted with Roman Reigns where Jey Uso came out and confronted the Big Dog. We also witness at the beginning of the show Sami Zayn trashing old Intercontinental belt. Zayn defeated Jeff Hardy later in the show to retain his Universal title. Meanwhile, you have arrived at the right platform, if you are looking for WWE SmackDown Oct 2, 2020 episode results and highlights. WWE SmackDown Sept 25, 2020 Results and Highlights: Roman Reigns Hits Jey Uso With Superman Punch Ahead of Universal Championship Match at Clash of Champions.

Jey Uso demanded his cousin Roman Reigns Clash of Champions Universal title rematch, prior to that Big Dog told to accept him as his family's tribal chief. We then saw AJ Styles interfering in this segment, where he said that Jey Uso is not capable for Universal title rematch against Reigns. We then saw both wrestlers battle out, where Jey defeated The Phenomenal One to prove his worthiness. Sami Zayn removed the pad of the top turnbuckle and made Jeff Hardy tripped on the hard surface. The Great Liberator seized the opportunity and rolled up the challenger to once again emerge victorious from an Intercontinental title match. WWE Raw Sept 28, 2020 Results And Highlights: Drew McIntyre Defeats Robert Roode to Retain World Title; Randy Orton Attacks Ric Flair, Big Show, Christian & Shawn Michaels.

Now let's speak of women's division, Sasha Banks came out and revealed that her neck is perfectly fine now as she has recovered from the injury and next week she will challenge Bayley for SmackDown women's title. Alexa Bliss was guest on Kevin Owen's show where we saw The Fiend Bray Wyatt appear. We then saw an unbelievable scene of The Fiend and Alexa Bliss passionately holding each other hands. The Fiend will face Kevin Owens next week on SmackDown.

@samizayn scratches and claws to escape with his #ICTitle! #SmackDown

The brace is off and it’s on! @sashabankswwe is coming for @itsmebayley and the #SmackDown #WomensTitle next week!

@carmellawwe is back and she’s UNTOUCHABLE!! #SmackDown

The Fiend & Alexa Bliss Are Together!

In case you wanted to know what @samizayn thinks about @jeffhardybrand and his “fraudulent” #ICTitle...#SmackDown

Sheamus defeated Shorty G in quick time. We also saw Otis win against John Morrison and he will also appear before the court on next week's episode of SmackDown to defend himself and his Money in the Bank contract.

(The above story first appeared on LatestLY on Oct 03, 2020 01:33 PM IST. For more news and updates on politics, world, sports, entertainment and lifestyle, log on to our website latestly.com).