WWE SmackDown September 25, 2020 episode was the last one before Clash of Champions pay per view. WWE Universal Champion Roman Reigns send out a strong message to his cousin Jey Uso by hitting him with a superman punch. The Big Dog will defend his title against Jey Uso at Clash of Champions 2020. 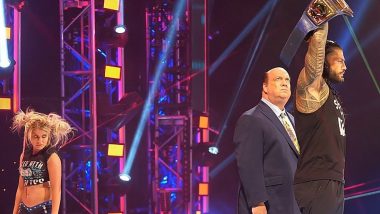 WWE SmackDown September 25, 2020 episode was the last one before Clash of Champions pay per view. WWE Universal Champion Roman Reigns send out a strong message to his cousin Jey Uso by hitting him with a superman punch.  The Big Dog will defend his title against Jey Uso at Clash of Champions 2020. Roman Reigns after assaulting Jey Uso stood tall with his belt alongside his manager Paul Heyman. Just then we saw Alexa Bliss pass by and give an eerie glare to Roman Reigns. Meanwhile, you have arrived at the right page if you are looking for WWE SmackDown Sept 25, 2020 results and highlights. WWE SmackDown Sept 18, 2020 Results and Highlights: Roman Reigns Teams Up With Jey Uso to Defeat Sheamus & King Corbin, Bayley Attacks Sasha Banks.

The segment between Roman Reigns and Jey Uso just happened after Alexa Bliss vs Lacey Evans match which was no less than a bizarre. Last week Evans was hit by Sister Abigail by Bliss for which she wanted to take revenge this week. The Sassy Southern Belle had full control of the match until The Fiend Bray Wyatt laughter sound started to echo and his face appeared all around. The Fiend's presence brought a vacant look to Bliss’ eyes, and the Superstar brutally attacked her opponent until the official stopped the match. Before leaving the ring Alexa Bliss landed a Sister Abigail to Lacey Evans. WWE Raw Sept 21, 2020 Results and Highlights: Randy Orton Assaults Drew McIntyre & Hits Keith Lee With Punt Kick; Retribution Reveals Themselves.

Surprisingly, there was no segment between Sasha Banks and Bayley on this recently-concluded episode of SmackDown. We saw Sami Zayn defeat AJ Styles and Jeff Hardy in a triple-threat match, however, The Phenomenal One had the last laugh as he took out both superstars sending out a strong message ahead of the ladder match for Intercontinental Championship between these three wrestlers. We saw King Corbin defeat Matt Riddle.

If looks could kill... @alexa_bliss_wwe_ #Smackdown

“You will NEVER take my place at the head of the table!” - @romanreigns to @uceyjucey #Smackdown

Sami Zayn Pulls a Quick One

Could This Be The Real Picture at Clash of Champions 2020

@samizayn got the win, but @ajstylesp1 got the last laugh going into #WWEClash! Will he climb the ladder on Sunday?! #Smackdown

Otis Money in The Bank Matter Moves to Court?

@otis_wwe isn’t giving up his #MITB Contract. This matter is going to court! #Smackdown

Fans will eagerly wait for Clash of Champions 2020 as we are just two days away from the event. It will be interesting to see numerous title matches, especially the WWE Championship match between Randy Orton and Drew McIntyre.

(The above story first appeared on LatestLY on Sep 26, 2020 09:41 AM IST. For more news and updates on politics, world, sports, entertainment and lifestyle, log on to our website latestly.com).