Apple has updated the videos on social media, including YouTube, for the iPhone 14 and iPhone 14 Plus launch advertisement after the lyrics were mistaken for racial slurs. 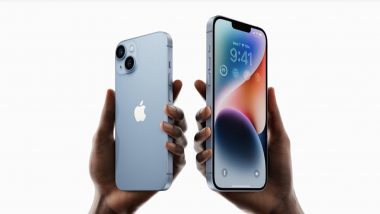 San Francisco, November 28: Apple has updated the videos on social media, including YouTube, for the iPhone 14 and iPhone 14 Plus launch advertisement after the lyrics were mistaken for racial slurs.

According to 9to5Mac, the original advertisement used a snippet of Idris Elba's Biggest song, with lyrics repeating the word "Biggest", in which the way the word was said in the song meant that some people heard an offensive racial slur instead. Apple iPhone 14, iPhone 14 Plus, iPhone 14 Pro & iPhone 14 Pro Max Launched in India; Check Price & Other Details Here.

Almost immediately after the ad aired in September, it became a viral meme. However, Apple responded two months later by removing the vocals from the ad's soundtrack entirely. Apple iPhone 14 Plus Sales Garnering Low Traction, Sales Lower Than Expected: Report.

If one watches the iPhone 14 and iPhone 14 Plus launch ads on YouTube today, they will no longer hear any vocals, instead, only the instrumental backing track is played for the entire duration of the video, according to the report.

The "Biggest" word was referring to the launch of the 6.7-inch iPhone 14 Plus, which is the company's biggest iPhone launch yet. However, without context, the pronounced syllables of "Biggest" overlaid with the music caused people to hear the n-word, said the report.

(The above story first appeared on LatestLY on Nov 28, 2022 10:11 PM IST. For more news and updates on politics, world, sports, entertainment and lifestyle, log on to our website latestly.com).