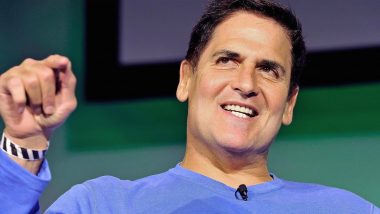 San Francisco: A group of crypto investors has filed a class-action lawsuit against billionaire investor and Shark Tank icon Mark Cuban, along with his basketball team the Dallas Mavericks, for promoting crypto platform Voyager Digital that went bankrupt, resulted in billions of dollars in loss for its customers. Cryptocurrency prices in India today (12 Aug 2022).

Top cryptocurrency broker Voyager Digital last month filed for bankruptcy in the US, resulting in more than 3.5 million investors losing $5 billion collectively. According to Techcrunch, Voyager Digital's CEO Stephen Ehrlich has also been named as a defendant in the class-action suit filed in Florida federal court.

The plaintiffs have described Voyager as "an unregulated and unsustainable fraud, similar to other Ponzi schemes". The lawsuit alleged that "Cuban and Ehrlich personally reached out to investors both individually and through a partnership with the Dallas Mavericks, to encourage them to invest with the platform".

Voyager Digital had significant investments in Singapore-based hedge fund Three Arrows Capital (3AC), which failed to make payments on a loan of 15,250 Bitcoins and $350 million USDCs -- that makes the loan worth more than $650 million.

Voyager suspended all trading, deposits, withdrawals and loyalty rewards on its platform before filing for bankruptcy. The Dallas Mavericks launched their exclusive, five-year partnership with Voyager in October 2021, giving fans cash rewards for making trades on the platform.

According to the lawsuit, Cuban promoted the company "as a Voyager customer himself, in a ploy to dupe investors into believing that Voyager was a safe platform".

Mark Cuban and the Mavericks are yet to comment on the lawsuit. Voyager has said it was actively pursuing all available remedies for recovery from 3AC. It had approximately $1.3 billion of crypto assets on the platform and more than $350 million of cash for customers.

(The above story first appeared on LatestLY on Aug 12, 2022 02:48 PM IST. For more news and updates on politics, world, sports, entertainment and lifestyle, log on to our website latestly.com).