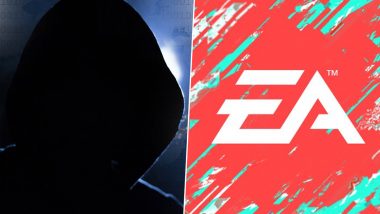 San Francisco: Cybercriminals have broken into game giant Electronic Arts (EA), stealing and selling massive 780GB data that contains game source code for FIFA 21, the Frostbite engine and other game development tools. Motherboard reports that EA, the publisher of Battlefield, FIFA and The Sims, has confirmed the data breach. India Among Top 3 Asian Countries Affected by DNS Cyber Attacks in 2021.

"We are investigating a recent incident of intrusion into our network where a limited amount of game source code and related tools were stolen," an EA spokesperson told Motherboard in a statement on Thursday. "No player data was accessed, and we have no reason to believe there is any risk to player privacy," the spokesperson added.

The hackers claimed on underground web hacking forums that they have "full capability of exploiting on all EA services" The hackers said they have taken the source code for FIFA 21, as well as code for its matchmaking server. Recently, hackers stole CD Projekt Red's source code for Cyberpunk 2077 and The Witcher 3. Last year, Japanese video game company Nintendo admitted that over 160,000 user accounts were compromised where hackers took the login IDs and passwords. Nintendo which "sincerely apologised" for the incident said it is disabling the ability to log into a Nintendo Account through a Nintendo Network ID (NNID) which became the gateway for hackers.

(The above story first appeared on LatestLY on Jun 11, 2021 12:18 PM IST. For more news and updates on politics, world, sports, entertainment and lifestyle, log on to our website latestly.com).