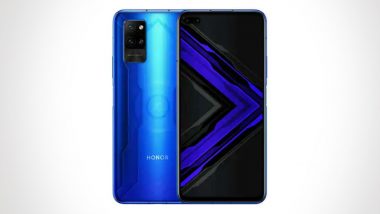 Honor, the Chinese smartphone brand will be officially launching the Honor Play 4 series in its home market on June 3, 2020. The company announced the launch of the new series through a poster that was shared on its Weibo account. Honor's new Play 4 series will comprise of two models - Play 4 and Play 4 Pro. Both the models are slated to make their debut in China next week. The newly leaked image of the handset shows a bright blue coloured, which will be one of the shades on offer. The smartphone also has been listed on TENNA website revealing technical details of the Honor Play 4. According to the database, the Honor Play 4 is listed with a model number - TNNH-AN00. Honor X10 5G Smartphone With Kirin 820 SoC Launched; Check Prices, Features, Variants & Specifications.

The phone maker is expected to offer 5G support on both smartphones. Moreover, the exact processor details are not mentioned in the database. So, it is believed that the company might employ MediaTek Dimensity 800 octa-core chipset which will be clocked at 2.0 GHz. While the Honor Play 4 Pro is likely to ve powered by a powerful chipset - HiSilicon Kirin 990 SoC.

As far as the specifications are concerned, the Honor Play 4 will sport a 6.81-inch screen with FHD+ resolution. It will be backed by a 4200mAh battery out of the box with the EMUI operating system. The handset will pack a quad-rear camera module comprising of a 64MP primary camera assisted by an 8MP ultra-wide-angle lens, and two dedicated 2MP depth and macro lens. At the front, there will be a 16MP camera housing inside the punch-hole display positioned at the upper left corner of the screen.

On the other hand, Honor Play 4 Pro will get only two rear cameras, which can be confirmed by the leaked images. If the market reports are to be believed, Honor seems to be approaching a different strategy here by offering more powerful sensors. More details about the smartphones will be revealed at the launch event.

(The above story first appeared on LatestLY on Jun 01, 2020 12:04 AM IST. For more news and updates on politics, world, sports, entertainment and lifestyle, log on to our website latestly.com).