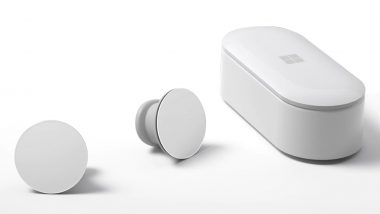 San Francisco, April 24: Microsoft Surface Earbuds will reportedly go on sale in European countries on May 6 for 199 euros. Microsoft first revealed the Surface Earbuds at its October hardware event last year. The earbuds were originally expected to arrive late last year, but the release was pushed several times, presumably to refine the product further, reports news portal Winfuture. The wireless earbuds can pair with Windows 10 computers and smartphones and can work with any platform. Microsoft Adds Five More Indian Languages to Translator Tool.

They work with Microsoft Office and Microsoft Teams, and support features like voice dictation and can also translate more than 60 languages in real-time. They offer active noise cancellation, Spotify, and touch controls on the large outer surface of each bud.

The Earbuds features omnisonic speakers, haptic swipe gesture support along with a dual-mic array to pick up audio. Combined with their case that charges with USB-C, the Surface Earbuds get 24 hours of playback. The report also claims that Microsoft may announce a new Surface Earbuds colour variant when these finally hit the shelves.

(The above story first appeared on LatestLY on Apr 24, 2020 05:11 PM IST. For more news and updates on politics, world, sports, entertainment and lifestyle, log on to our website latestly.com).