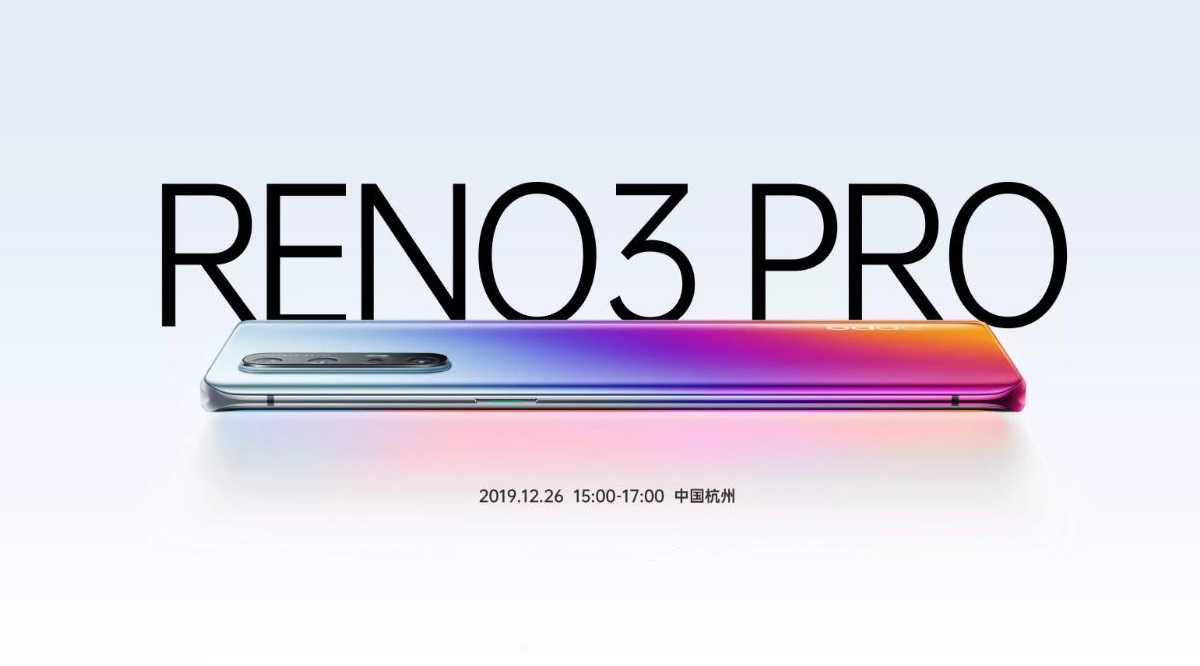 Oppo, the Chinese smartphone brand has officially confirmed that it will be launching the Reno 3 smartphones on December 26, 2019. The Oppo Reno 3 and Reno 3 Pro smartphones will be making their global debut at an event in Hangzhou, China. We already know that Oppo has confirmed Reno 3 and Reno 3 Pro to get dual-mode 5G support. Additionally, the TENAA listing also reveals that both the phones will come equipped with quad cameras at the rear. Apart from the new Oppo 3 Series, the Chinese phone maker is also rumoured to introduce the Oppo Enco Free true wireless earbuds at the launch event, which is slated for December 26. Realme Buds Air, Realme X2 Launching in India on December 17.

Moreover, the company went ahead and shared a poster image on its Weibo account confirming the launch date of Oppo Reno 3 series. According to the market reports, the Oppo Reno 3 series will comprise of the regular Reno 3 and Reno 3 Pro.

Moreover, the Pro derivative of Reno 3 will be powered by the newly launched Qualcomm Snapdragon 765G chipset. The phone maker has officially confirmed the same. Offering dual-mode 5G (SA + NSA) support, both the phones will run on ColorOS 7 skin out-of-the-box

Though the company will be launching the smartphones in the next couple of weeks, the registration page of the Oppo Reno 3 Series is already live in China. The listed page clearly gives the first glimpse of the phone's design.

Going by the official teaser, the new Oppo Reno 3 will sport a curved display upfront. The phone will pack Qualcomm Snapdragon 765G SoC that will be mated with 12GB of RAM. We will also be seeing quad rear cameras on the phone. The module will comprise of a 48MP primary sensor assisted with a 13MP lens, an 8MP snapper and a 2MP shooter.

We have also mentioned that the company will also be launching Oppo Enco Free true wireless earbuds alongside Oppo Reno 3 series on December 26 event.  The company went ahead to share the official pictures of Oppo Enco Free earbuds that will be offered in 3 shades - White, Pink and Black. It is interesting to note that the design of Oppo earbuds is slightly similar to Huawei's FreeBuds 2. However, we are yet to hear regarding the specifications and features of the earbuds. More details about the devices will be revealed at the launch event.