Poco M4 Pro 5G global launch has been set for November 9, 2021. The company has teased the device via its official global Twitter account. 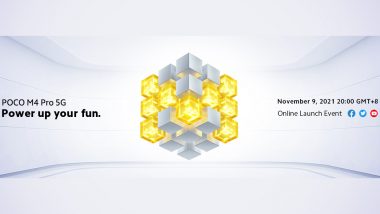 Poco M4 Pro 5G global launch has been set for November 9, 2021. The company has teased the device via its official global Twitter account. The tweet reveals the launch date and time. As per the tweet, the virtual launch event will take place at 8 pm GMT+8 (5:30 pm IST) and will be streamed live via Twitter, Facebook and YouTube. Poco Sells Over 20 Lakh Units of C3 Smartphone in India.

The poster released on Twitter does not reveal the design or any key details of the smartphone. The handset has been reportedly spotted on multiple certifications websites with model numbers 21091116AC and 21091116AG.

The beloved M-series is back for one last time in 2021!

Stay tuned on November 9th at 20:00 GMT+8 for the last POCO launch of the year! pic.twitter.com/kopKxTwFqY

Moreover, the handset is speculated to come with 8GB RAM and might run on Android 11 OS. As compared to its predecessor, Poco M4 Pro 5G is likely to come upgraded processor and cameras. Apart from this, nothing more is known about Poco M4 Pro 5G. We expect the company to release a few teasers before its launch.

(The above story first appeared on LatestLY on Oct 28, 2021 06:14 PM IST. For more news and updates on politics, world, sports, entertainment and lifestyle, log on to our website latestly.com).