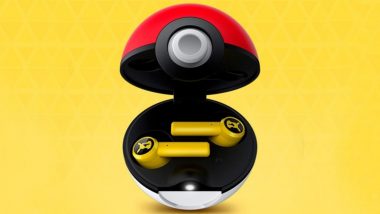 Razer, The global gaming hardware manufacturer officially revealed the special edition Pikachu wireless earphones with a Pokeball Case. The official Razer logo has been relocated to the backside of the Pikachu designed earphones. The Pokeball case acts as a charging case where the front button of the case lights up to show battery levels. OnePlus 8, OnePlus 8 Pro Smartphones Launched; Check Prices, Features & Specifications.

The Pikachu true wireless earbuds come with IPX4 water resistance, Bluetooth 5.0 Connectivity & low latency for mobile gaming, the voice commands in the earbuds are voiced by Pikachu which is the best part of all. Coming to the Battery part, the True wireless earbuds can last up to 3 hours on a single charge & can be extended up to 15 hours with the charging case. OnePlus 8, OnePlus 8 Pro To Be Launched in India in Next Few Months.

The super cool looking Pikachu true wireless earbuds are only available in China & will retail for $120 From April 16. The charging case gives a real Pokemon experience & is launched with a wrist strap so that users don't accidentally throw it pretending to grab their favourite Pokemon specie.

(The above story first appeared on LatestLY on Apr 15, 2020 11:51 AM IST. For more news and updates on politics, world, sports, entertainment and lifestyle, log on to our website latestly.com).