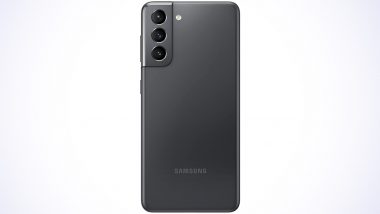 However, the size makes perfect sense, considering that the phone will be quite compact, and even more pocket-friendly than the recently announced iPhone 13, the report said.

The report said that the S22 will be smaller in length, width, as well as thickness than the iPhone 13 which already measures 146.7 x 71.5 x 7.7 mm. This effectively makes the S22 one of the most compact Android flagships in recent times. The last time Samsung pulled off something similar was with the S10e that had a screen size of 5.8 inches. The S22 will be sized a tad larger though with a diagonal of 6.06 inches.

Lastly, the compact upcoming Samsung flagship will feature a charging speed of 25W. This is slower than the 45W (10V 4.5A) charging speeds supported by its larger siblings -- the S22+ and S22 Ultra. The series is expected to into mass production next month and will likely be available for purchase from January 2022.

(The above story first appeared on LatestLY on Sep 20, 2021 08:55 AM IST. For more news and updates on politics, world, sports, entertainment and lifestyle, log on to our website latestly.com).