April Super Pink Moon 2021 FAQs: What Time is the Supermoon? How Often Does the Pink Moon Happen? Will it be Visible in India? 5 Frequently Asked Questions Answered

What is a Pink Super Moon? Will the Moon really be pink in colour? How often does such a celestial event happen? In this article, check the answers to the five most frequently asked questions (FAQs) related to April Super Pink Moon 2021. 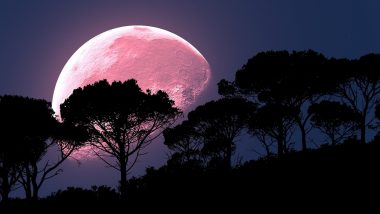 The upcoming celestial event—a pink supermoon is scheduled to grace the sky on April 26-27. The Super Pink Moon is a combination of a full moon and a supermoon. This full pink Moon is one of just a few supermoons this year, and it is an astronomical sighting you can enjoy, no matter where you are in the world. But there are sure are many questions that are running in your head right now. What is a Pink Super Moon? Will the Moon really be pink in colour? How often does such a celestial event happen? Will it be visible in India? And many more. In this article, check the answers to the five most frequently asked questions (FAQs) related to April Super Pink Moon 2021.

A supermoon occurs when a full moon happens to be closest to the Earth during its orbit. It appears as much brighter and larger than normal because the Moon is at the closest point to us on Earth. The Pink Supermoon or Super Pink Moon is the first and only full Moon that occurs in April.

2. Will the Moon be Pink in Colour?

Even though it is called the Pink Moon, the Moon's shade will actually not be different. According to The Old Farmer’s Almanac, it is called a Pink Super Moon because the celestial event corresponds with the blooming of moss pink—a wildflower that is native to eastern North America.

3. How Often Does the Pink Moon Happen?

April is offering the Pink Moon. Every year, we see a Pink Moon in April. Other names for this Moon include the Full Sprouting Grass Moon, the Egg Moon or the Full Fish Moon.

4. What Time is the April Supermoon?

5. Will the Super Pink Moon be Visible in India?

The Super Pink Moon will be visible to everyone across the world. The timing may be different. While the Pink Moon is expected to grace the sky on April 26-27, Indians can get the best view on April 27, at 5:00 am IST and at 4:00 pm IST.

April’s supermoon will reportedly be about six percent larger than the average full Moon, and 14% bigger than some full moons. So, are you ready for the upcoming celestial event? Amid the ongoing crisis, many are looking forward to witnessing the once-in-a-year event gracing the sky. To get the best view, you do not have to venture out to a remote place but instead, look at it from your terrace or balcony.

(The above story first appeared on LatestLY on Apr 23, 2021 02:51 PM IST. For more news and updates on politics, world, sports, entertainment and lifestyle, log on to our website latestly.com).