Super Pink Moon 2021 Date and Time: How to Watch April Full Moon? All You Need to Know About the Celestial Event

The upcoming celestial event, the Super Pink Moon will grace the sky on April 26-27. But why is it called the Pink Moon? In this article, we bring you all the details related to Pink Super Moon 2021. 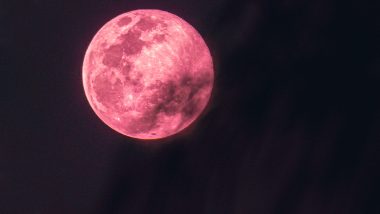 It’s time for the season’s supermoons, starting with the most-awaited Super Pink Moon. April’s full moon is one of the most awaited celestial events. The month’s full moon will be the biggest and brightest of the year, appearing as the first of only two supermoons in 2021. That’s what makes the upcoming Super Pink Moon 2021 so special. But why is it called the ‘Pink Moon?’ What is the date and time? How to watch? Ahead of the celestial event, you must be having a lot of queries. Worry not, as we bring you all you need to know about the Super Pink Moon 2021.

Why Is It Called Super Pink Moon?

The full moons typically look the same all year, but their names aren’t based on their appearances. According to the Old Farmer’s Almanac, the Pink Moon is named for the phlox, a pink flower that typically blooms in April in North America. However, the moon will not appear in pink; instead, it will look brighter and bigger than it usually is on a full moon night. Lyrids Meteor Shower 2021 Dates.

What Is a Super Pink Moon? How to Watch It?

During the full moon, the moon bears its full face to Earth dwellers, when our planet sits right between the sun and the moon. A supermoon occurs when a full moon happens to be closest to the Earth during its orbit. A supermoon appears as much brighter and larger than normal because the moon is at the closest point to us on Earth. You can watch the Super Pink Moon with the naked eye.

Like the other full moons, Super Pink Moon has other names such as Sprouting Grass Moon, Fish Moon, Hare Moon, and Paschal Moon. Because of the COVID-19 pandemic, people are encouraged to stay indoors as much as possible. You do not have to venture out to remote places to watch the April Full Moon. The Pink Super Moon is so bright, you can see it from your balcony or terrace. The next full moon is Super Flower Moon on May 26, 2021.

(The above story first appeared on LatestLY on Apr 15, 2021 04:32 PM IST. For more news and updates on politics, world, sports, entertainment and lifestyle, log on to our website latestly.com).