Murder Hornets Can Cause Ecological Risks! Here Is How Scientists Planing to Eradicate the Asian Giant Hornet Spotted in the US for the First Time 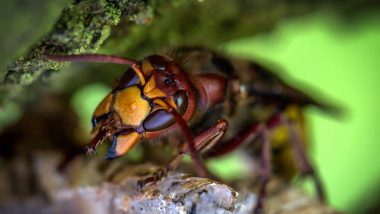 Asian giant hornet, nicknamed, the ‘murder hornet’ has created quite a stir among citizens after it made its way to the United States. A behemoth of a bug with an equally big sting, the hornet’s appearance has left scientists to worry of possible threat to humans and bees. As the world remains under attack from the coronavirus outbreak, the arrival of murder hornets is not great news. Multiple stings are deadly to humans, and they have a terrible reputation for destroying honeybees, whose bodies they feed to their young. Hence, entomologists are planning to eradicate the bees, before they cause any harm to the environment. Scientists say it is significant to get rid of the murder hornets because it can cause human health danger, ecological risk and impacts on care and management of beekeeping. 'Murder Hornets' in US For The First Time; Know About The Largest Wasps That Kill Almost 50 Humans Per Year!

In Asia, murder hornet stings are thought to cause as many as 50 deaths, a year, according to a New York Times report. The Hornets made their first appearance in North America in August 2019, in British Columbia, Canada. Months later in December, the same year, the flying insects were reported a few miles north from the site in Blaine, Washington. The sightings have worried the scientists.

Washington State University (WSU) stated that beekeepers in the region had reported gruesome hive deaths in recent months. Hence, the WSU scientists are now taking the lead to find, trap and eradicate the murder hornets. Should humans be worried? The Washington State Department of Agriculture (WSDA) noted that the hornets are not especially aggressive, unless it comes to protecting their nests or a beehive, they are attacking. Chris Looney, an entomologist at the WSDA, told the National Geographic that he is “very worried,” as this kind of hornet is quite tough. He further added that if they cannot wipe out all of the nests within a couple of years, then the Asian giant hornet will be another invasive species that is here to stay.

How to Eradicate the Murder Hornets?

Murder hornets even have the ability to sting multiple times, even through a beekeeper’s suit. So, if the scientists are planning to eradicate the flying insects, how will they do it? Besides, it also seems difficult to locate the bees. The WSDA noted that the lack of traps for this type of insect, makes it hard to know where they are; hence it can be a challenge. “Looney and other researchers are setting out lures to try to capture emerging queens,” noted the National Geographic report. “In the summer, the researchers will set out hundreds of traps to continue looking for queens and workers, which would emerge in the summer if any new colonies are established. They could then try to attach radio-transmitting collars so they could track the wasps back to their nests and destroy them,” it added.

Both Washington and British Columbia have started a campaign to enlist the public to report sightings of the species. WSDA has also updated its website with photos and information about various types of hornets and wasps to help people to distinguish what type of insect they are.

(The above story first appeared on LatestLY on May 05, 2020 11:50 AM IST. For more news and updates on politics, world, sports, entertainment and lifestyle, log on to our website latestly.com).