'Lakes' Under Mars South Pole May Not Be Real

Subsurface lakes found under Mars' south pole, using data from the European Space Agency's Mars Express orbiter, may not really be lakes at all, argue researchers. 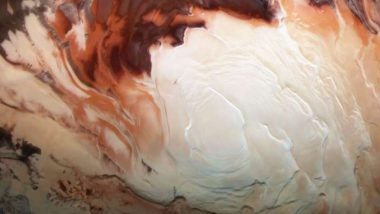 Two research teams in 2018, working on data from the Mars Express orbiter announced a surprising discovery: Signals from a radar instrument reflected off the red planet's south pole appeared to reveal a liquid subsurface lake.

However, a team of scientists at NASA and Arizona State University (ASU) found dozens of similar radar reflections around the south pole after analysing a broader set of Mars Express data. Mars May Be Hiding Most of Its ‘Missing' Water Underground: NASA-Funded Study.

But, according to them, many are in areas that should be too cold for water to remain liquid.

"Usually, radar waves lose energy when they travel through a material, so reflections from deeper down should be less bright than those from the surface," said Aditya Khuller of ASU's School of Earth and Space Exploration.

"Although there are a few possible reasons for unusually bright subsurface reflections, these two studies concluded that a liquid water component was the cause of these bright reflections, because liquid water appears bright to radar," added.

For the new study, the team expanded the search for similar strong radio signals to 44,000 measurements spread across 15 years of MARSIS data over the entirety of the Martian south polar region.

It revealed dozens of additional bright radar reflections over a far greater range of area and depth than ever before. In some places, they were less than a mile from the surface, where temperatures are estimated to be minus 63 degrees Celsius -- so cold that water would be frozen, even if it contained salty minerals known as perchlorates, which can lower the freezing point of water.

"We're not certain whether these signals are liquid water or not, but they appear to be much more widespread than what the original paper found," said Jeffrey Plaut from NASA's Jet Propulsion Laboratory (JPL).

"Either liquid water is common beneath Mars' south pole, or these signals are indicative of something else," added Plaut.

Mars Express is the second-longest-surviving continually active spacecraft in orbit around a planet other than Earth, behind only NASA's still-active 2001 Mars Odyssey.

(The above story first appeared on LatestLY on Jul 04, 2021 05:41 PM IST. For more news and updates on politics, world, sports, entertainment and lifestyle, log on to our website latestly.com).