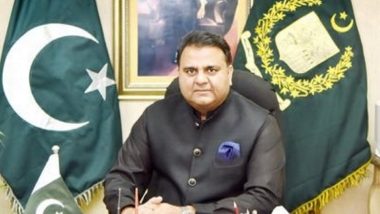 New Delhi, September 7: Pakistan Minister for Science and Technology Fawad Chaudhry was quick to take a jibe at the Chandrayaan 2, terming the spacecraft -- which the debt-ridden country is far from capable of developing -- as a mere "toy". Now let us look at their space programme. Pakistan's National Space Agency SUPARCO (Space and Upper Atmosphere Research Commission), which was set up in 1961, took 50 years to launch its first communication satellite into the orbit by using Chinese-made launch vehicle, that too with aid from a subsidiary of China Aerospace and Technology Corporation.

The agency was established eight years before the Indian Space Research Organisation (ISRO). Decades hence, while the ISRO made world records such as sending 104 satellites in space in a single launch in 2017, Pakistan's space agency has witnessed series of failures and setbacks. In 58 years of its existence, SUPARCO has largely been denied the funding and resources needed to ensure a sustained rate of advancement and innovation. Chandrayaan 2: Only 5% of the Mission Is Lost, Orbiter Still Flying Around Moon, Says ISRO Official.

The likelihood of the agency's budget being swelled anytime soon is grim, in consideration to the country's debt-ridden state. Yet the condition that the sub continent's oldest agency today finds itself in should not be blamed on the state of the economy but on the disinterest of Pakistan's politicians.

The real downfall of the agency came in 1980s and 1990s, when the then President Zia-ul-Haq cut off funding to major ongoing projects, including the flagship satellite communication launch. The state policy of discriminating against minorities was reflected in Pakistan's space programme when they shunned Abdus Salam for being an Ahmadiyya and the assistance that the Noble Laureate could have offered for the growth of the space agency.

Military generals replaced scientists atop the organisation and the focus of the agency moved from independent research to countering India. The current chairman of the space agency, Qaiser Anees Khurrum, is the former top general. Overlooking the embarrassing budget allocated to the space agency, Chaudhry recently made a bold announcement that Pakistan would launch its first manned space mission in 2022.

Unexpectedly, the impracticality of the claim became a subject to much ridicule. Albeit, if the claim is tried to be taken seriously for a minute, the accomplishment would take no less than a scientific and technological renaissance in a country which centres its attention around internationalising the "internal matters" of its neighbours.

Only a handful of universities in Pakistan offers aeronautical engineering degrees and there are yet fewer institutes committed to scientific research and development, according to a report by The Express Tribune. The manufacturing or purchase of space shuttles, a launchpad, mission control facilities, and tracking and data relay satellites all count as major capital investments and the guarantee of heavy returns greatly depends on the high success rates of these missions.

The clinginess of Chaudhry's jibes on the Chandrayaan 2, and the fact that his tweet spelt the very word 'satellite' incorrectly stands a little short of some of the other absurd claims made by him in the past. Back in May, he went as far as to say that the Hubble Space Telescope was sent into space by SUPARCO, instead of NASA.