Twitter on Thursday said it will carefully review the "unsolicited, non-binding" proposal from Tesla CEO Elon Musk to acquire the micro-blogging platform for more than $43 billion. 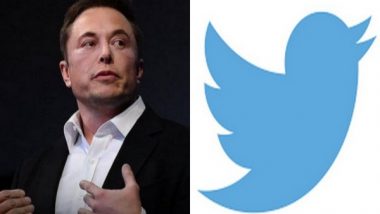 San Francisco, April 14: Twitter on Thursday said it will carefully review the "unsolicited, non-binding" proposal from Tesla CEO Elon Musk to acquire the micro-blogging platform for more than $43 billion.

"The Twitter Board of Directors will carefully review the proposal to determine the course of action that it believes is in the best interest of the Company and all Twitter stockholders," the micro-blogging platform said in a statement. Elon Musk Proposes Authentication Mark For Everyone Who Signs Up For Twitter Blue.

"I invested in Twitter as I believe in its potential to be the platform for free speech around the globe, and I believe free speech is a societal imperative for a functioning democracy," Musk said in the filing.

"However, since making my investment I now realise the company will neither thrive nor serve this societal imperative in its current form. Twitter needs to be transformed as a private company."

In a letter to Twitter's board, Musk said he believes Twitter "will neither thrive nor serve societal imperative in its current form". "If the deal doesn't work, given that I don't have confidence in management nor do I believe I can drive the necessary change in the public market, I would need to reconsider my position as a shareholder," he added.

Earlier this week, Twitter CEO Parag Agrawal announced that Musk will not join the board of the company, saying that "he believes it is for the best". The Indian-origin CEO last week said the micro-blogging platform has appointed Musk to its board of directors. Musk, who acquired 9.2 per cent share in the micro-blogging platform for nearly $3 billion, is limited from buying more than 15 per cent of Twitter's stock.

(The above story first appeared on LatestLY on Apr 15, 2022 10:45 AM IST. For more news and updates on politics, world, sports, entertainment and lifestyle, log on to our website latestly.com).