Xiaomi Mi 11 Lite was revealed a couple of months ago in the global markets. The Chinese phone brand now plans to bring the handset to Indian shores, and the same could have very soon. 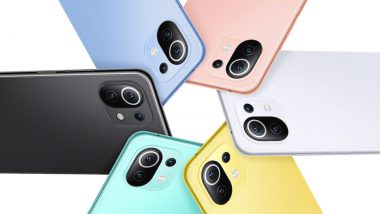 Xiaomi Mi 11 Lite was revealed a couple of months ago in the global markets. The Chinese phone brand now plans to bring the handset to Indian shores, and the same could have very soon. The upcoming Mi 11 Lite will come as an addition to Xiaomi's popular Mi 11 series, consisting of Mi 11 Ultra and the Mi 11X Pro series. US District Court Says Xiaomi No Longer a Chinese Military Company, Lifts Securities Ban.

Recently, a tipster Abhishek Yadav suggested that the company would launch a 4G version of the phone in the Indian market. It's worth noting that there's no official word from Xiaomi on the same. The arrival of the phone was previously teased by the Marketing Lead, Sumit Sonal. The tweet doesn't specifically confirm the Mi 11 Lite, but it worth noting the mention of a ‘Lite and Loaded’ device.

The Mi 11 Lite is a part of the Mi 11 series, which comes in both 4G and 5G variants. It sports a 6.55-inch FHD+ AMOLED display with a 90Hz refresh rate. Under the hood, there is a Qualcomm Snapdragon 732G SoC. However, the 5G variant uses a Snapdragon 780G chipset. The handset comes with up to 8GB of RAM and up to 128GB of inbuilt storage.

In terms of the camera department, the phone gets three rear snappers similar to the Mi 11. It includes a 64MP main primary lens assisted by an 8MP ultra-wide lens and a 5MP shooter that functions as a telephoto as well as a macro lens. The front camera is a 16MP shooter for selfies and video calls. It is backed by a 4,250mAh battery with 33W fast charging. It runs on MIUI 12 based on Android 11 OS. Talking about prices, the Xiaomi Mi 11 Lite gets a starting price of EUR 299 (which is around Rs 25,000). As for India prices, we will have to wait for that announcement. We expect it to be priced under Rs 25,000 in the Indian market.

(The above story first appeared on LatestLY on May 27, 2021 10:25 PM IST. For more news and updates on politics, world, sports, entertainment and lifestyle, log on to our website latestly.com).