Belarusian air carriers' will be banned from flying over the European Union (EU) airspace and also using runways in response to the forced diversion of a Ryanair flight and detention of a dissident journalist . 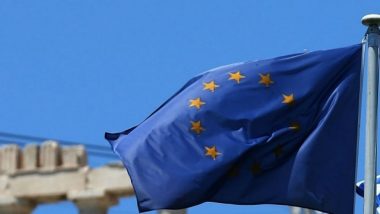 Brussels, June 5: Starting from Saturday, Belarusian air carriers' will be banned from flying over the European Union (EU) airspace and also using runways in response to the forced diversion of a Ryanair flight and detention of a dissident journalist and his girlfriend last month.

The 27 countries are obliged 'to deny permission to land in, take off from or overfly their territories to any aircraft operated by Belarusian air carriers', the bloc announced on Friday after member states envoys in Brussels formally signed off the move.  Who Is Roman Protasevich, the Arrested Journalist in Belarus? Why Did His Arrest Draw Global Attention?

Belarusian journalist Roman Protasevich and Sofia Sapega were on board a commercial flight between EU countries Greece and Lithuania that was rerouted on May 23 to Minsk shortly before it reached Vilnius due to an alleged bomb threat, reports DPA news agency. No bomb was found, but both were detained. World News | Jailed Belarus Journalist Says He Was Framed in Prison Video.

The bloc slammed the act as an affront to both air safety and freedom of the press. The EU has also called on all bloc-based carriers to avoid flying over Belarusian territory. World News | Protests Call for Release of Belarus Journalist.

The International Air Transport Association (IATA) condemned Minsk's behaviour but also criticized the EU. 'Two wrongs do not make a right. Politics should never interfere with the safe operation of aircraft and politicians should never use aviation safety as a cover to pursue political or diplomatic agendas,' Willie Walsh, IATA's director general, said in a statement.

The bloc is also preparing a package of economic sanctions on individuals involved in the incident, but this could still take some time to finalize, according to dpa's diplomatic sources.

(The above story first appeared on LatestLY on Jun 05, 2021 04:32 PM IST. For more news and updates on politics, world, sports, entertainment and lifestyle, log on to our website latestly.com).