Who Is Roman Protasevich, the Arrested Journalist in Belarus? Why Did His Arrest Draw Global Attention?

Roman Protasevich, a 26-year-old blogger and activist, is a co-founder and a former editor of the NEXTA channel on the social media platform Telegram. 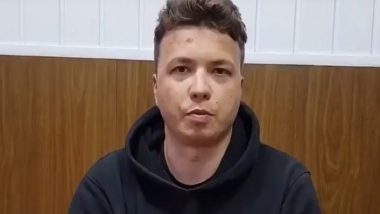 Minsk, May 25: A video of dissident Belarusian journalist Roman Protasevich, who was arrested after a passenger plane he was on was forced to land in Minsk, has emerged online. In the video, Roman Protasevich is seen admitting to charges of organising protests in Belarus. The dramatic arrest of Protasevich not only drew international attention, but also prompted leaders of the European Union (EU) member states have agreed to cut the bloc's air links with Belarus. Ryanair Plane Incident: Welcome EU Call for Sanctions on Belarus, Says US President Joe Biden.

Who is Roman Protasevich?

Roman Protasevich, a 26-year-old blogger and activist, is a co-founder and a former editor of the NEXTA channel on the social media platform Telegram. The NEXTA channel reportedly helped mobilise protests against long-time President of Belarus, Alexander Lukashenko. Anticipating arrest, Protasevich fled Belarus in 2019 and has been living in exile in Luthiana since.

Roman Protasevich became a staunch critic of President Alexander Lukashenko at his young age. In 2011, he was expelled from the Belarus State University for participating in a protest rally.

"I confess and cooperate with the investigation" says Roman #Protasevich in a video released by the #Belarusian authorities. This obviously looks like a forced confession; + the marks on his forehead..

Roman Protasevich was flying to Vilnius from an economic conference in Greece with the Belarusian opposition leader Svetlana Tikhanovskaya on May 23. He was onboard flight FR4978 of Irish airline Ryanair. The flight was made to land at an airport in Minsk after the Belarusian authorities had alerted the crew on the plane about a possible security threat. However, nothing untoward was found.

After the flight landed in Minsk, the Belarusian authorities de-boarded Protasevich and took him into custody. Belarusian state media reported that the plane's diversion came on President Lukashenko's personal instructions, after he had purportedly been alerted to a possible bomb on board.

Lukashenko also ordered a MiG-29 fighter jet be scrambled to accompany the Ryanair plane, according to the Belta news agency. The fact that the Belarusian authorities and President Lukashenko went to extraordinary lengths to stop Protasevich made his arrest a global news.

(The above story first appeared on LatestLY on May 25, 2021 02:51 PM IST. For more news and updates on politics, world, sports, entertainment and lifestyle, log on to our website latestly.com).