Belarus President Alexander Lukashenko Says ‘If Ukraine Does Not Come to an Agreement With Russia, It Will Sign the Act of Surrender’

President of Belarus, Alexander Lukashenko, has said that if Ukraine does not agree with Russia now, it will eventually sign an act of surrender. 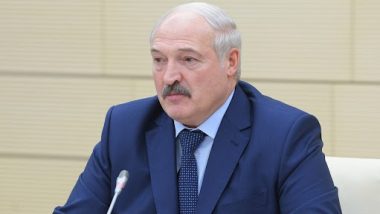 According to Lukashenko, now the Russian side is offering Ukraine a settlement and an agreement, which are acceptable. "Perhaps, the only moment that may not be repeated is for Ukraine to adequately get out of the current situation. If this moment is lost, it will most likely never come back. This situation will no longer exist. Therefore, Ukraine needs to cling to this moment," he stressed. Ukraine-Russia Peace Talks Could Last Several Weeks.

In an interview with the Japanese TV channel TBS, Lukashenko also said that Ukrainian President Zelensky currently has little control over the processes taking place in the country.

"I can only express my point of view regarding Zelensky now. I think that he manages the processes in Ukraine a little. Even before the conflict, he did not delve into these processes much, probably due to his preparedness or unpreparedness. But he is not a stupid person. And I hoped that with experience, in the second presidential term, he would absolutely adequately manage the situation in Ukraine. That did not happen. A conflict has begun," he was quoted as saying.

According to Lukashenko, the situation in Ukraine is currently controlled by representatives of the West and the US, who have taken the process of countering Russia into their own hands.

"In addition to the fact that they officially supply the most modern weapons there, I think they are in charge of a complete military resistance, a military process in Ukraine.

"Roughly speaking, Zelensky has two phones on his desk: one phone and the second is a satellite connection with Biden and British Prime Minister Johnson. Thus, two phones. So, basically it is controlled by these two leaders. A dependent person," he said.

(The above story first appeared on LatestLY on Mar 19, 2022 06:29 PM IST. For more news and updates on politics, world, sports, entertainment and lifestyle, log on to our website latestly.com).