COVID-19 Vaccine Update: Pfizer Candidate May be First to Win Approval in US, Suggests Donald Trump 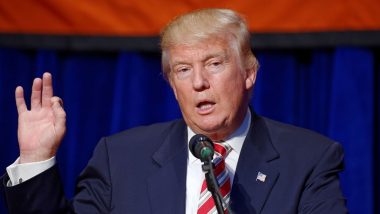 New Delhi, September 21: The vaccine being developed by American pharmaceutical giant Pfizer, in coordination with German drugmaker BioNTech, may be the first in the United States to win approval. The indication was made by President Donald Trump during an interview with a leading news channel on Monday. Pfizer COVID-19 Vaccine Can be Given to Americans by 2020-End if Granted FDA Nod by October, Says CEO Albert Bourla.

Trump claimed that Pfizer's vaccine development is on track and has made significant gains over the past few days. At this pace, he suggested, their candidate could be cleared before Johnson & Johnson - which was earlier expected to emerge as the first with the silver bullet against COVID-19 in America.

Trump's remark on Pfizer comes nearly a week after the company's chief executive officer - Albert Bourla - claimed that it could roll out the vaccine by December-end if granted regulatory approval by October.

The Food and Drug Administration (FDA), which will take the final call on vaccine's safety, will decide by end of the next month whether Pfizer should be allowed to manufacture the vaccine doses. The company is prepared to manufacture and commercially distribute "hundreds of thousands of doses" if it receives the federal agency's nod, said Bourla.

The United States, to this date, remains the worst-affected country in terms of caseload and total deaths. The nation has reported over 7 million cases and more than 200,000 deaths.

(The above story first appeared on LatestLY on Sep 21, 2020 08:43 PM IST. For more news and updates on politics, world, sports, entertainment and lifestyle, log on to our website latestly.com).