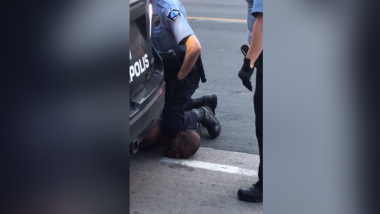 Minneapolis, June 4: George Floyd, whose custodial death at the hands of Minneapolis cop sparked a wave of black rights' protest across the United States, was diagnosed with coronavirus. The final autopsy report of Floyd claimed that he had tested positive for the highly contagious disease in April, and continued to carry the infection till his demise despite being asymptomatic. Who Was George Floyd? Why Was He Detained? Here's Why the Death of the 46-Year-Old African-American in Minneapolis Sparked Violent Protests in US.

The autopsy report, however, categorically states that he neither died of COVID-19 nor the disease abetted his death. Floyd passed away due to "cardiopulmonary arrest" -- a cardiac arrest caused by sudden loss of blood flow, stated the final post-mortem report submitted by Hennepin County Medical Examiner's Office.

The lack of blood flow was directly linked to the assault by Minneapolis police on the deceased, moments before his demise. The kneeling on his neck by cop Derek Chauvin led to lack of blood flow in his brain, which also led to asphyxia.

The manner of death has been ruled as "homicide". The same conclusion was reached in the private autopsy commissioned by the bereaved family, whose report was released on Monday.

Floyd was killed on May 25 after a team of Minneapolis cops apprehended him on the charge of using a counterfeit currency. After handcuffing him, Floyd was pinned on the ground near the police vehicle. Chauvin, one of the police personnel, kneeled on his neck for over eight minutes. In the video that went viral, Floyd could be seen gasping and repeatedly saying "I can't breathe".

(The above story first appeared on LatestLY on Jun 04, 2020 09:20 AM IST. For more news and updates on politics, world, sports, entertainment and lifestyle, log on to our website latestly.com).