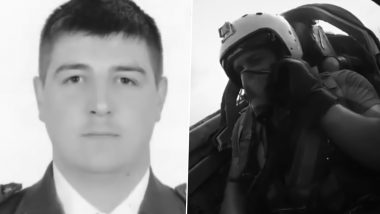 Ukrainian pilot 'Ghost of Kyiv', who shot down as many as 40 Russian aircraft was killed in a battle last month. Ukrainian Air Force pilot Major Stepan Tarabalka became a cult figure at the beginning of the war and came to be known as the 'Ghost of Kyiv'. During the war, he shot down many Russian aircraft with his MiG-29 fighter aircraft. He was killed on 13 March in a Russian anti-aircraft missile attack.

It is claimed that on the very first day of the attack, this pilot shot down six Russian fighter planes. The Ukrainian government itself had also released many videos by giving the name of Ghost of Kyiv. However, it was also claimed that Ukraine was promoting a fictional character Ghost of Kyiv to encourage its troops.  Ghost of Kyiv: Unconfirmed Ukrainian Pilot Hailed For Reportedly Shooting Down 6 Russian Jets

During the beginning of the war, a video on social media also became very viral. It reportedly showed a Ukrainian jet flying through the skies over several cities and dogfights hitting six Russian planes. One of these videos has been viewed more than 50 lakh times. However, a Reuters fact check found that the video being shared was fake. The video was a clip from the 2008 videogame Digital Combat Simulator. Ghost of Kyiv: Ukrainian Video Showing MiG-29 Pilot is Fake And Made Using Digital Combat Simulator Game

Now, sources have confirmed his identity and his death to The Times. The pilot's helmet and goggles are now expected to go up for sale at an auction in London. The Ukrainian Defense Ministry itself tweeted a video from its official Twitter account praising the skill and bravery of the Ghost of Kyiv. After his initial success, the Ukrainian government called him the Ghost of Kyiv. This Ukrainian Air Force ace protects our capital and the skies of the country.

The pilot has been posthumously awarded the Order of the Golden Star, Ukraine's top award for bravery in combat. He has been awarded the title Hero of Ukraine. Two days before his death, the General Staff of Ukraine shared a photo of this veteran fighter sitting in the cockpit. Tarabalka of Ukraine was born in the village of Korolyvka in the west of Ukraine to a working-class family. He studied at Kharkiv National University of the Air Force. Local social media accounts have claimed that this pilot shot down more than 40 Russian planes.

(The above story first appeared on LatestLY on Apr 30, 2022 12:27 PM IST. For more news and updates on politics, world, sports, entertainment and lifestyle, log on to our website latestly.com).