Google Sued For Antitrust Violations: What is The Case All About? Why US Justice Dept Moved Court Against The Search Engine Giant?

Since Google controls about 90 percent of the global web searches, the company is considered to have nearly monopolised the space of internet searches. Most advertisements on the medium are drawn by Google, and the company is further accused of usurping smaller players whose technological innovations could have challenged its dominance. 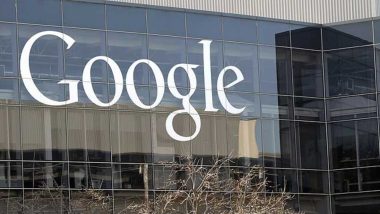 Washington, October 20: Around 20 years after the United States administration took on Microsoft, a case has now been filed against another major tech player - Google - for allegedly violating antitrust laws. The US Justice Department has decided to take legal action against the search engine giant after the congressional hearings suggested that the company has nearly monopolised itself in global web searches, and compelled users to share personal information through applications like browsers, maps, calendars and others. Google Sued for Antitrust Violations, Justice Department Files Landmark Antitrust Case Against Tech Giant.

The Justice Department, in a statement issued on Tuesday, said it would sue Google for violating the norms of open market, and attempting to create a monopoly which is against the ethos of American economy. Other States, which are also probing Google, may join the Justice Department to press a consolidated suit.

What is The Antitrust Case Against Google All About?

In the United States, where capitalism and free-marketism is considered as bedrocks of the economy, all states as well as the federal administration have enacted the antitrust laws. Also referred to as the competition laws, the statues included under it are aimed at consumers from "predatory business practices". They ensure that "fair competition exists" in an open-market economy.

Why Google is Under The Radar?

Since Google controls about 90 percent of the global web searches, the company is considered to have nearly monopolised the space of internet searches. Most advertisements on the medium are drawn by Google, and the company is further accused of usurping smaller players whose technological innovations could have challenged its dominance.

A recent report from a House Judiciary subcommittee estimated that Google bought off 260 companies, which could a number of potential challengers, in the past 20 years. The report was based on a year-long investigation into the tech giant's market dominance.

“It is critical that the Justice Department's lawsuit focuses on Google's monopolization of search and search advertising, while also targeting the anticompetitive business practices Google is using to leverage this monopoly into other areas, such as maps, browsers, video, and voice assistants,” Rep. David Cicilline of Rhode Island, who is a member of the House Committee, said in a statement.

How Has Google Responded?

The California-based company has rejected all the allegations levelled against it. It has reiterated that most of its services are free and air aimed at providing convenience to the consumers. Google further attempted to refute the allegations of storing personal data, stating that the users are not forced to share their information and are free to avail the services from its competitors.

"Today's lawsuit by the Department of Justice is deeply flawed. People use Google because they choose to -- not because they're forced to or because they can't find alternatives," Google said in a statement, adding that it is committed to acquit itself from all the charges in the court of law.

The Google vs Justice Dept battle is considered crucial as it could emerge as a gateway for a spree of other legal bouts involving tech majors, claim analysts. The lawsuit has been filed amidst the ongoing investigations against Facebook, Apple and Amazon by the Justice Department and the Federal Trade Commission.

(The above story first appeared on LatestLY on Oct 20, 2020 10:37 PM IST. For more news and updates on politics, world, sports, entertainment and lifestyle, log on to our website latestly.com).