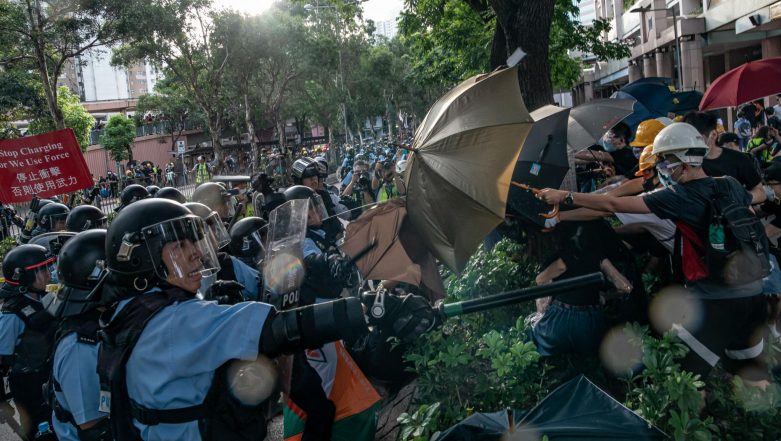 Hong Kong, July 14: Police and protesters clashed again in Hong Kong Sunday as unrest caused by a widely-loathed plan to allow extraditions to mainland China showed no sign of abating. Police used pepper spray and batons against small groups of protesters who took over a road on the sidelines of another huge rally in Sha Tin, a district that lies between the main urban sprawl around the harbour and the Chinese border. Hong Kong Protests Intensify, Pro-Democracy Protesters Storm Into Legislative Council Building - Watch Video.

Masked protesters responded by building barricades from metal fencing and a stand-off with riot police ensued. Hong Kong has been rocked by more than a month of huge largely peaceful protests -- as well as a series of separate violent confrontations with police -- sparked by a law that would have allowed extraditions to mainland China and other countries. Last month, parliament was trashed by hundreds of masked, youth-led protesters in unprecedented scenes.

The bill has since been postponed, but that has done little to quell public anger which has evolved into a wider movement calling for democratic reforms, universal suffrage and a halt to sliding freedoms in the semi-autonomous hub. Protesters are also demanding the bill be scrapped entirely, an independent inquiry into police use of tear gas and rubber bullets, an amnesty for those arrested, and for the city's unelected leader Carrie Lam to step down. Tens of thousands marched through Sha Tin on Sunday, the fifth week in a row that Hong Kong has seen such huge rallies. Almost all have ended with violence between police and a minority of hardcore protesters.

"We have marched so many times but the government still didn't listen, forcing everyone to take to the street," Tony Wong, a 24-year-old protester on the Sha Tin march, told AFP. Many protesters see the rallies as part of an existential fight against an increasingly assertive Beijing. "This is a dangerous moment. Hong Kongers can choose to die or they can live. We're on the edge but fortunately we haven't died off yet," said JoJo So, a woman in her fifties who was attending the rally. Hong Kong Protests: Two Million Descend Onto the City’s Streets.

Beijing has thrown its full support behind Lam, calling on Hong Kong police to pursue anyone involved in the parliament storming and other clashes. Under the 1997 handover deal with the British, China promised to allow Hong Kong to keep key liberties such as its independent judiciary and rights like freedom of speech. But many say that 50-year deal is already being reneged on, citing the disappearance into mainland custody of dissident booksellers, the disqualification of prominent politicians and the jailing of democracy protest leaders. Authorities have also resisted calls for the city's leader to be directly elected by the people.